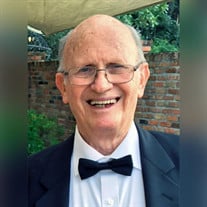 After a long journey, Roswell A. “Ronnie” Pogue left this earth peacefully, free of pain and with dignity, at age 90 due to complications from the COVID-19 virus. Born in New Orleans, he moved to Covington at age 3 and was a life-long resident. He was well-known for his quick wit and gregarious smile. An avid athlete, Ronnie played football and basketball at Covington High, earning All-State honors as a point guard in 1946. He worked as a soda jerk at the old pharmacy at the corner of Boston and New Hampshire streets and as a lifeguard at Bogue Falaya Park. As a teenager, he loved to play ping pong and has a few trophies to prove it. He could often be found shooting pool at Nathan’s Bar and Grill as an under-age teen, reportedly hiding under the table when the constable occasionally walked by. He absolutely loved growing up in Covington with his good buddies Cypie Schoen, Tweedle Jackson, Hankus Ferrer and Ralph Menetre. Ronnie went on to study education at both LSU and Southeastern LA University. After graduating SLU, he was drafted and served a short enlistment in the post-war Army. He then met his future wife, Bettie Ramagos, at the Southeast Louisiana State Mental Hospital (he was physical education coordinator and she was a nurse!). They married in 1957 and raised four sons. A career educator, he served as a classroom teacher, girl’s basketball coach, principal and School Board Supervisor. He served on the Covington City Council and made a run for Mayor. He was President of many civic organizations in Covington, including the Rotary Club, Playmakers Theater, the United Way, and Community Concerts. After retirement he went into business, first owning a Precision Tune and then three restaurants with his wife, Bettie. He loved amateur theater, performing in 50 plays throughout his life with Playmakers. His love of fishing led him to spend many a day in his boat on the Tchefuncte River or at his camp on Bayou Lacombe. A big LSU fan with season tickets for many years, he picnicked on a real tailgate at many home games before it became a fad. Ronnie was preceded in death by his father, Roswell, his mother, Catherine and his sister, Elva. He is survived by his wife of 63 years, Bettie; his four children, Les, Alan, David and Ros; daughters-in-laws Sarah and Terrie; and four grandchildren, Mary Catherine, Forrest, Shelby and Hanna; all whom he dearly loved. Due to the COVID pandemic, funeral arrangements will be an immediate-family-only graveside service and the family asks that personal visits be delayed until after the virus subsides. In lieu of flowers, they ask that donations be made in Ronnie’s name to any Alzheimer’s/Veteran’s charities or Playmakers, Inc. The family would also like to thank the healthcare workers at both Beau Provence Memory Care and St. Tammany Parish Hospital ICU and Hospice Care

After a long journey, Roswell A. &#8220;Ronnie&#8221; Pogue left this earth peacefully, free of pain and with dignity, at age 90 due to complications from the COVID-19 virus. Born in New Orleans, he moved to Covington at age 3 and was a life-long... View Obituary & Service Information

The family of Roswell "Ronnie" Adolph Pogue created this Life Tributes page to make it easy to share your memories.

After a long journey, Roswell A. “Ronnie” Pogue left this earth...

Send flowers to the Pogue family.