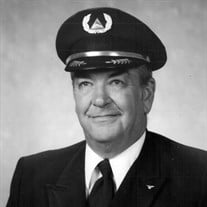 Surrounded by his family, Richard Martin Warner took his final flight to his heavenly home on January 27, 2022 at the age of 86. He was born on Nov. 4, 1935 in his family home in Covington, Louisiana. Richard is survived by his brother, Robert Warner (Ruthie), his sister, Maria (Tissie) Gibson, and his former spouse and mother of his children, Dorothy Lynn Theriot LeBlanc. He was the father of 4 children: Richard “Ricky” Warner, Jr. (Rhonda), James “Jimmy” Warner, John Daniel “Danny” Warner (Tena), and Rebecca “Becky” Warner McLain (Sherman). He was also the proud grandfather and Papaw of Chad Warner, James Warner, Jr., Matthew Warner, Melissa “Christy” Warner, Misty Metiever, Kelly Black, Katie Foxworth, Kaycee Young, Andrew McLain, Sarah Thompson, and Zachary McLain and the great grandfather of 21 great grandchildren. He is preceded in death by his mother, Ria Young Warner, his father, JH Warner, and his daughter, Barbara Lynn Warner. Richard was a native of Covington and graduated from Covington High School. After high school he attended LSU where he played in the Tiger band. He briefly served in the National Guard and the Civil Air Patrol. In 1956, he began his professional career as a pilot for Delta Airlines where he flew for 30 years. He also owned a couple of local businesses in Covington. He lived a full life with involvement in many organizations in the community and his church. It would only take a few minutes with Richard to realize he had a passion for and wealth of knowledge in aviation. He was a lifelong member of the EAA and an active participant in multiple aviation groups and organizations. He inspired and left a legacy for multiple generations of future aviators including his brother, two of his sons, a grandson, a great grand-daughter and three nephews. Along with his passion for flying; his hobbies included building and restoring light aircraft, building boats, fishing, and farming. He loved music and would often be heard humming tunes throughout his day. He played brass instruments with community and church orchestras and sang in his church choirs and praise teams with his booming bass voice. He also served in various capacities in local churches around the community. He was an active participant for over 50 years in the Covington Chapter of the Masonic Lodge where he taught and inspired many younger men in the community. Richard was a great father, proud grandfather, and a faithful friend. He is known for his colorful sense of humor, his love to constantly read and learn, having a soft heart for stray animals, and helping those in need. In lieu of flowers, the family asks for contributions be made in memory of Richard Warner to: St Jude Hospital at www.stjude.org or to the International 180/185 Club for Future Aviator Scholarship Fund at https://skywagons.org/ Relatives and friends are invited to the Funeral Service at E. J. Fielding Funeral Home, 2260 W. 21st Avenue, Covington, Louisiana 70433 on Tuesday, February 1, 2022 at 11:00 AM with visitation from 9:00 AM until service time. Interment will follow the service at Pinecrest Memorial Gardens, 2280 W 21st Avenue, Covington, LA. E. J. Fielding Funeral Home has been entrusted with the arrangements. The family invites you to share thoughts, fond memories, and condolences online at E. J. Fielding Funeral Home Guest Book at www.ejfieldingfh.com.

Surrounded by his family, Richard Martin Warner took his final flight to his heavenly home on January 27, 2022 at the age of 86. He was born on Nov. 4, 1935 in his family home in Covington, Louisiana. Richard is survived by his brother, Robert... View Obituary & Service Information

The family of Richard Martin Warner created this Life Tributes page to make it easy to share your memories.

Surrounded by his family, Richard Martin Warner took his final...

Send flowers to the Warner family.