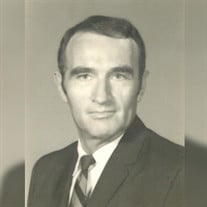 William “Ruday” Adkins, age 97, of Covington, LA passed away on Thursday, October 1, 2020. He was born on October 26, 1922 in Shongaloo, LA to Thomas Frank Adkins and Willene (Roseberry) Adkins. Ruday is survived by his children Ingrid Ann Adkins Gradisar, Martha Frances Adkins O’Brien, Janna Joy Adkins LeGuin, Mary Lynn Adkins, and Marilyn Joan Adkins Reid; 13 grandchildren and 17 great-grandchildren. Ruday is preceded in death by his beloved wife Frances Head Adkins, his brother Thomas Gwynn Adkins, and his parents. He was a retired teacher with a Bachelor’s Degree from Louisiana Tech, as well as a Bible teacher. Ruday proudly served in the United States Army during World War II. He was raised in Shreveport, LA, but was a lifelong resident of Covington, LA. Relatives and friends are invited to attend the funeral services at E.J. Fielding Funeral Home, 2260 W 21st Ave, Covington, LA 70433 on Thursday, October 8, 2020 at 11:00 AM with visitation on Thursday beginning at 10:30 AM. Interment will follow the services in Pinecrest Memorial Gardens. Due to COVID-19 restrictions social distancing is recommended, and face mask are required for services.

The family of William Ruday Adkins created this Life Tributes page to make it easy to share your memories.

Send flowers to the Adkins family.