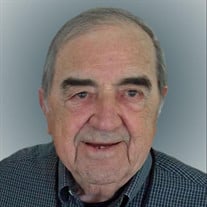 Walter P. Landry peacefully passed away on Saturday, February 13, 2021 at his home in Covington, LA., surrounded by his devoted children. He was born on November 25, 1930 in New Orleans, LA to the late Richard Louis Landry, Sr. and Caroline Marie Mauroni Landry. Walt was raised by his Aunt, Agnes Landry Jones, after his mother passed away when he was 18 months old. Walt was the beloved husband of the late Jacqueline Heffner Landry. He was the loving father of M’Liss Landry Crosier, M.D. (Jess E. Crosier, M.D.), Leslie Landry Lucak (Jeffrey), Walter Peter Landry, Jr. (Pamela), and Patricia Landry Breyel (Tony). Walt was the proud grandfather of Benjamin Erwin Crosier and Jess Walter Crosier; Kyle Peter Lucak (Alexa); Joshua Paul Landry and Stephen Thomas Landry; and Sophie Jacqueline Breyel. He was the brother of the late Richard Louis Landry, Jr., Mildred Landry Fortier, Roy Landry, and Ronald Landry. Walt grew up in New Orleans, Louisiana in the Bayou St. John Neighborhood, and attended St. Rose de Lima Catholic grammar school and St. Aloysius High School. Following service to his country in the Korean War, he attended Tulane University, earning a degree in Business Administration. For over 40 years he practiced insurance adjusting as owner of W.P. Landry Claims Service. Walt handled major catastrophe losses including fire, wind, and water damage to warehouses and historic buildings in the French Quarter. He was a lifelong Tulane Green Wave and LSU Tigers fan, having to pull for both sides due to his children’s attendance at both universities. Walt was a devoted father, and could always be seen at swim meets, playground football games, theatre, and scholastic quiz bowls. He was very proud of his children and grandchildren. His home was always open to family and friends, where pool parties and barbecues were the customary ways to spend a Saturday or Sunday afternoon in Covington. Additionally, Walt was a history buff, sharing his knowledge and insight of WW2 with family and friends. He was a faithful parishioner of St. Peter’s Church, always sitting in one of the last pews and catching up before mass with the regulars around him. A Funeral Mass was held at E.J. Fielding Funeral Home, 2260 W. 21st Avenue, Covington, LA 70433 on Thursday, February 18, followed by Internment at Pinecrest Memorial Gardens, Covington, LA. In lieu of flowers, the family appreciates a donation in Walt’s name to one of his favorite charities “The Society of the Little Flower” devoted to St. Thérèse and work carried out by Carmelite nuns, seminarians, and missionaries. The family wishes to express their gratitude to Walt’s physicians and their staff, especially Dr. Ralph Millet, Dr. David Cressy, Dr. Richard Bermudez, and Dr. Jay Saux. Warmest regards from the family to the St. Tammany Health System Hospice program for their loving care. Family and friends are invited to Share a Memory on the Tribute Wall at www.ejfieldingfh.com.

Walter P. Landry peacefully passed away on Saturday, February 13, 2021 at his home in Covington, LA., surrounded by his devoted children. He was born on November 25, 1930 in New Orleans, LA to the late Richard Louis Landry, Sr. and Caroline... View Obituary & Service Information

The family of Walter Peter Landry Sr. created this Life Tributes page to make it easy to share your memories.

Send flowers to the Landry family.