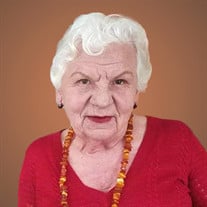 Valentina Biryukova passed away on Tuesday, April 20, 2021 in Abita Springs, LA. She was born on February 23, 1936 in Yerevan, Armenia to Ivan Biryukov and Olga Kozlitina. Valentina was the loving mother of Natalya B. Flint (Alfred). She was the proud grandmother of Alfred Flint III and Victor Flint. Valentina was the sister of Vladimir Biryukov. Valentina’s early life was very hard. Born into a war-ridden time, Valentina and her brother, Vladimir, were raised alone by her mother, Olga, for a long portion of her childhood before her father finally returned home from fighting in WWII. In young adulthood, Valentina’s passion for nature led her to earn her degree in Geology; which allowed her to make a career in nature and explore Armenia through geological expeditions. She eventually gave up this career to be a mother when she birthed her only daughter, Natalya. She then worked for 20 years as a manager at a military factory that produced microchips for Russian planes before she finally retired. Valentina moved to America in 1999, into a house with her daughter and son-in-law, Alfred Flint Jr., and their children. She then dedicated the rest of her life to raising her two grandsons, Alfred III and Victor Flint, and bettering the lives of all her family in any and every way that she could. She loved like no other and will be dearly missed. Relatives and friends are invited to the Funeral Mass at E.J. Fielding Funeral Home, 2260 W. 21st Avenue, Covington, LA 70433 on Tuesday, April 27, 2021 at 2:00 PM with visitation from 12:00 Noon until Mass time. Interment will follow the service at Pinecrest Memorial Gardens, Covington, LA. In lieu of flowers, donations may be made to https://cash.app/$bwphanto. Please Share a Memory on the Tribute Wall at www.ejfieldingfh.com.

Valentina Biryukova passed away on Tuesday, April 20, 2021 in Abita Springs, LA. She was born on February 23, 1936 in Yerevan, Armenia to Ivan Biryukov and Olga Kozlitina. Valentina was the loving mother of Natalya B. Flint (Alfred). She was... View Obituary & Service Information

The family of Valentina Biryukova created this Life Tributes page to make it easy to share your memories.

Send flowers to the Biryukova family.