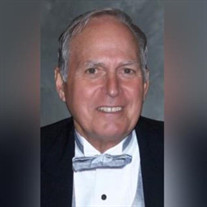 Thompson Howard &#8220;Tom&#8221; Ford passed away peacefully with his family on September 10, 2020 in Covington, Louisiana at the age of 84 after enduring a hard, yet admirable last few years with dementia. He is survived by his devoted wife... View Obituary & Service Information

The family of Thompson Howard "Tom" Ford created this Life Tributes page to make it easy to share your memories.

Thompson Howard “Tom” Ford passed away peacefully with his family...