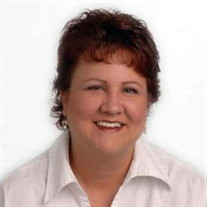 Shawna Meaux Terrell Licata passed away on Sunday, August 1, 2021 in Covington, LA. She was born on November 23, 1975 in Kalispell, MT to Rosemary Harringa Meaux and Delma Joseph Meaux, III. Shawna was the beloved wife of Kenneth Lee Licata. She was the loving mother of Tori Veronica Terrell and stepmother of Kenneth Licata, Jr., Jennifer Licata, Angelika Licata (Anthony Hahn, Sr.), and Alexi Licata. Shawna was the proud grandmother of Kingston Rae Simpson, and step grandmother of Brooke Logrande, Bailee Lipps, Britney Lipps, Dennis Lipps, Jr., Anthony Hahn, Jr., and Axton Hahn, and great-grandmother of Paisleigh Logrande. She was the sister of Angie Meaux Giroir (Brandon). She was the aunt of Noah, Nathan, Nicholas, and Nolan Giroir. Shawna was the first granddaughter of Nell and Delma Joseph Meaux, Jr., and the first great granddaughter of the late Marie Meaux and Delma Joseph Meaux, Sr. She was the granddaughter of Ruth Thompson Harringa and the late Melvin Harringa. She is survived by the father of her daughter, Tori, Michael A. Terrell. Shawna attended Mandeville High School and was a graduate of Annapolis Area Christian School in Annapolis, MD where she resided with her Aunt and Uncle, Margaret Meaux Templeton and Rick Templeton. She attended the University of Louisiana at Lafayette and Delgado Community College where she studied Criminal Law and received an Associate’s Degree in Business. Shawna worked as a real estate agent in Covington, LA with Danny Stokes Real Estate and Coldwell Banker. She was a loving and caring person. She loved spending time with and caring for her grandchildren. A memorial service will be held by the family at a later date. E.J. Fielding Funeral Home has been entrusted with arrangements. Please Share a Memory on the Tribute Wall at www.ejfieldingfh.com.

The family of Shawna Meaux Terrell Licata created this Life Tributes page to make it easy to share your memories.

Send flowers to the Licata family.