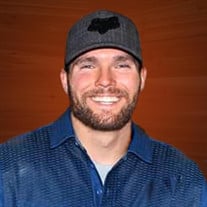 On December 18, 2020, Seth was called home to our heavenly father after a tragic and unexpected workplace accident in Zachary, Louisiana. He will always be remembered for his sense of humor, twinkling eyes, a smile that could light up a room, and as his sisters say, “the best hugs ever”. Seth would tell you his greatest love in life was being a father to his two boys, Tucker and William. He greatly enjoyed taking Tucker fishing and playing with his boys. While his first love was his family, his second love was serving his country. Seth enlisted in the United States Army and served two combat tours in Afghanistan attached to the 10th Mountain Division. After completing active duty, Seth enlisted in the Louisiana Army National Guard, serving with the 843rd Engineering Company in Franklinton, LA. He was promoted to Staff Sergeant in the weeks preceding his death. Seth was respected amongst his peers, co-workers, and superiors for his honor and work ethic. Seth is loved and will be greatly missed by his wife, Ashley Degelos Knight, their son Seth William Knight, Jr., 1, of Ponchatoula, LA, his son Tucker William Knight, 7, of Picayune, MS, his father, Tracy Mark Knight of Bush, LA, and his mother, Laurel Jackson Knight Gay of Diamondhead, MS. He was also loved and will be greatly missed by his siblings: Jessica Knight Pritchard, (Casey), Cecelia Knight Stewart (Toby), Cierra Knight Bui (Henry) and Montana Knight. Seth was a loving uncle to 2 nieces and 5 nephews. He is also survived by his paternal grandmother, Carolyn W. Knight Foster and step-grandfather, Jerry Foster of Baton Rouge, LA, his maternal grandfather, Robert “Bob” Jackson of Diamondhead, MS, and his maternal grandmother, Barbara Rankin. Numerous aunts, uncles, and cousins will miss watching his continued growth into manhood. Seth is preceded in death by his paternal grandfather, Clyde William Knight Sr. * Due to COVID-19 restrictions, social distancing and masks are required to attend services.* Relatives and friends are invited to the Funeral Service at E.J. Fielding Funeral Home, 2260 W. 21st Avenue, Covington, LA 70433 on Saturday, December 26, 2020 at 2:00 PM with visitation from 12:00 Noon until service time. Interment will follow the service at Talley Chapel Community Church Cemetery, Sun, LA. In lieu of flowers, donations may be made to the Wounded Warrior Project, www.woundedwarriorproject.org. Please Share a Memory on the Tribute Wall at www.ejfieldingfh.com.

On December 18, 2020, Seth was called home to our heavenly father after a tragic and unexpected workplace accident in Zachary, Louisiana. He will always be remembered for his sense of humor, twinkling eyes, a smile that could light up a room,... View Obituary & Service Information

The family of Seth William Knight Sr. created this Life Tributes page to make it easy to share your memories.

Send flowers to the Knight family.