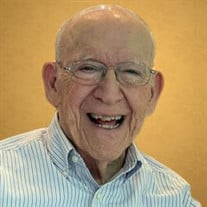 On April 2, 2022, Sergio Bolivar Gutierrez – devoted husband, loving father, and grandfather – died peacefully, surrounded by his family, at his home in Madisonville, Louisiana. He was 89 years of age. All who met him loved him. He will be greatly missed as he truly made a mark in so many lives. He was born on August 16, 1932 in Havana Cuba to Francisco and Albertina Bolivar Gutierrez and was the youngest of three sons. He and his wife Marina Rigau Gutierrez fled Cuba to the United States. They were married for 21 years and had 5 children. Sadly, in 1981 Marina passed. Sergio was blessed to find love a second time and is survived by his wife of 37 years, Susan Gaiennie Gutierrez. He also is survived by his five children: Maria Isabel (Jake) Martin, Sergio (Ingmar) Gutierrez, Maria Rosa (Gary) Gutierrez, Vivian (Berta) Gutierrez, Adriana (Bryan) Gutierrez Kriesen; his seven grandchildren Marina (Ryder), Mary Ellen, Benjamin, Nikolai, Madalyn, Nadal, and Natalia; and his brother Oscar Gutierrez. His oldest brother Alberto Gutierrez preceded him in death. Sergio was proudly educated by the Christian Brothers of La Salle. He attended the University of Havana where he completed his studies in Electrical Engineering and, after arriving in the United States, he received a Master’s in Electrical Engineering from Louisiana State University. He had a very successful career with Entergy. Yet, what was most important to him was his family and his Catholic faith. Because Sergio believed it was important to live his faith by helping others, throughout his life he was deeply involved in his parish churches and served as a Eucharistic minister and sacristan and volunteered for various organizations – roles that allowed him to touch so many lives. He brought communion to the sick at nursing homes and hospitals as well as to the homebound. He had a special heart for those exiled from other countries to the United States and helped them make a new life in his adopted country. Earlier experiences in his life left him with the fondness for political debate. His mischievous side always emerged, especially when discussing current events with his grandchildren. His happiest and most joyful moments were those when he was surrounded by his entire family. All are invited to visitation at E. J. Fielding Funeral Home, 2260 West 21st Ave Covington, LA, from 11:00 AM – 12:30 PM on Saturday April 9, 2022. Following the visitation, the funeral mass to celebrate his life will be held at St. Peter Catholic Church at 1:30 PM at 125 E. 19th Ave, Covington LA. Interment will follow mass at St. Joseph Abbey Cemetery, St. Benedict, LA. In lieu of flowers, please make a donation to St. Peter Catholic School in Covington, LA (https://www.stpetercov.org/) or Archbishop Hannan High School in Covington, LA (https://www.hannanhigh.org/) to help families in need of education assistance.

On April 2, 2022, Sergio Bolivar Gutierrez &#8211; devoted husband, loving father, and grandfather &#8211; died peacefully, surrounded by his family, at his home in Madisonville, Louisiana. He was 89 years of age. All who met him loved him.... View Obituary & Service Information

The family of Sergio Bolivar Gutierrez created this Life Tributes page to make it easy to share your memories.

Send flowers to the Gutierrez family.