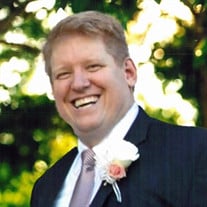 Scott Nielson Conlin began his turn on earth early in the morning of 22 August 1966 in Provo, UT, two days after his goodly parents graduated from Brigham Young University. His parents took him to Santa Fe, New Mexico at two weeks of age, where... View Obituary & Service Information

The family of Scott Nielson Conlin created this Life Tributes page to make it easy to share your memories.

Scott Nielson Conlin began his turn on earth early in the morning...

Send flowers to the Conlin family.