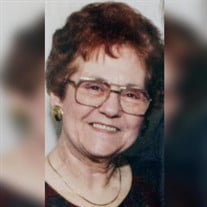 OLSON, RUTH SEELING CLARK OLSON, born on June 27, 1933, joined her Heavenly Father and many friends and relatives September 3, 2020. She was the daughter of the late Arthur T. “Buddy” and Magdalen Klein Seeling, beloved wife and soul mate of Richard Allen Olson, devoted mother of Donna M. Clark (Rob Clapp), Pensacola, Florida, The late Captain Wesley A. Clark (Diana Boylston Clark), Metairie, and Wayne N. Clark, (Joni McGinnis Clark), Metairie, proud grandmother of Wayne “Nick” Clark, Jr., Father Travis J. Clark, Sarah E. Clark Decker, (Collin) and the late John C. “Jay” Korndorffer, loving great-grandmother of Taylor C. McLelland of Pensacola, Fl., Felix Dexacker, Anna Clark, and Theodore “Theo” Clark of Amsterdam, the Netherlands, Beckham “Buddy” Decker, Gideon Decker, of Metairie, only sister of the late Audrey Seeling Finger, Aunt of Donald Finger and Janet Finger Foreman. She also leaves behind six step-children, 22 step-grandchildren, and 5 step great grandchildren. “Ruthi” enjoyed 25 years of service with Jefferson Parish in the Departments of Safety and Code Enforcement, Planning Department, Criminal Justice Department, and Library Administration retiring in 1990. She then returned to school studying Computer Science at Delgado Community College during which time she began employment in Delgado’s administrative offices. She served on the Boards of St. Ann’s St. Vincent dePaul Conference, Sacred Heart of Jesus High School’s Alumni, the Jefferson Parish Retired Public Employees Association, and Deutsche Gesellschaft, the organization for people of German heritage, located in Metairie. Born and reared in Metairie, she moved to Folsom. La., in 2005 as a result of Hurricanes Katrina and Rita. A member of St. John the Baptist Catholic Church in Folsom, she became the secretary to St. John’s Pastoral Council. Ruthi was proud of her secretarial skills and enjoyed writing novels. In addition, Ruthi enjoyed people, especially her many friendships. Her crackling and witty comments were astounding to all that knew her but her honesty in her remarks was often blunt and disarming. Her family was the light of her life and her faith kept her strong and open to challenges. She once quoted Colette, French author, who said: “I love my past. I love my present. I’m not ashamed of what I’ve done, of what I’ve had, and I’m not sad because I have it no longer.” Ruthi savored her past, loved being in the present, and was proud of what she had and what she had done. The family would like to thank, Ruthi’s care givers especially Paula for all the care and loving devotion. An evening Visitation will be held Monday, September 7, 2020 at E.J. Fielding Funeral Home from 5:00 PM to 8:00 PM with Rosary at 6:00 PM. Visitation Tuesday, September 8, 2020, 10:00 to 11:00 AM at St. John the Baptist Catholic Church, 11345 St John Church Road Folsom, LA 70437 followed by a Mass at 11:00 AM. Ruth’s grandson Reverend Travis Clark will be officiating. Burial will be private in the Seeling family tomb at Greenwood Cemetery, 120 City Park Ave., New Orleans.

OLSON, RUTH SEELING CLARK OLSON, born on June 27, 1933, joined her Heavenly Father and many friends and relatives September 3, 2020. She was the daughter of the late Arthur T. &#8220;Buddy&#8221; and Magdalen Klein Seeling, beloved wife and... View Obituary & Service Information

The family of Ruth Seeling Clark Olson created this Life Tributes page to make it easy to share your memories.

Send flowers to the Olson family.