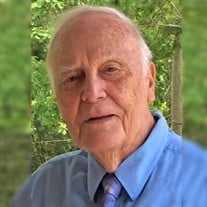 Russell Francis Hendrick, age 93, was called to the Lord on Tuesday, Jan. 26, 2021. He died peacefully at home surrounded by his loving family. He was a family man, an entrepreneur, a nature and music enthusiast, and, as a life-long Catholic, a humble man of God. For his family he was a hero, and will always be remembered for what he taught them, not so much with his words, but by the way he lived. He loved God first. His faith was most important to him and like all things he was blessed with, he quietly shared it with everyone. He loved his family next, his wife, his children, and his many grandchildren. Russell was the beloved husband of June Villarrubia Hendrick for 70 years. He was the loving father of seven children, Barbara Borden (George), Russell G. “Jerry” Hendrick Sr. (Melanie), Lynn De Melo (Johnny), Suzanne Ritchie (Steve), Janet Burckel (Wayne), June Malbrough (Bobby Hurst), and Joan Montreuil (Eddie). He was the proud grandfather of 36 grandchildren, Theresa Heraty (Pat), Brad Borden (Ana), Ben Borden (Cyd), Adam Borden; Kristie Giardina, Russell Hendrick Jr. (Dane), Chad Hendrick (Priscilla), Ann Marie Boyd (Brad); Jenny Maura (Juan Andres), Jessie Book (David), Jason De Melo (Frankie), Nathan De Melo (Theresa), Tim De Melo (Marni), Josh De Melo, Daniel De Melo; Austin Ritchie (Rhiannon), Jordan Ritchie (Olivia); Melissa Stiebing (Bruce), Victoria Acosta (Javier), Wayne Burckel, Sarah Burckel; Monique Cullen (David), Eddie Montreuil (Corina), Tiffany Montreuil, Rebecca Baxley (Billy), Rachel Kernan (Jarred), Justin Montreuil, Laura Montreuil, Nick Montreuil, Scott Montreuil, Cecile Montreuil; Matt Malbrough (Casey), Melissa Gravois (Alex), Dylan Malbrough, Mary Beth Malbrough, Michael Malbrough; and the great-grandfather of 59 great-grandchildren with four more on the way this year, so far. He was the brother of Brice “Allain” Hendrick (Julie) and Elaine Hendrick, who preceded him in death. Born on May 31, 1927 in New Orleans, Louisiana, Russell was the son of the late Russell Hendrick and the late Louise Menard Hendrick. Married in 1950, Russell and June moved with their young family to Kenner in 1955, then Metairie in 1969 where they lived for more than two decades. He co-founded Short Stop Superette in 1966, which later became Russell’s Short Stop Poboys. He ran the business for 26 years before handing it on to his son, Russell Sr. After retirement, Russell and June resided for more than 20 years in Covington. A man of deep faith, Russell was a long-time parishioner of St. Lawrence the Martyr Catholic Church in Metairie and St. Peter Catholic Church in Covington. As a roaming Catholic, he also frequently attended mass at St. Joseph Abbey in St. Benedict, Louisiana; and, in the last years of his life, he prayed the daily mass and the Divine Mercy Chaplet from home through EWTN Catholic television. Russell was a graduate of Saint Aloysius High School, class of 1945. He enlisted in the Navy in 1945 as an aviation cadet and was separated from the service with an Honorable Discharge in 1946 after World War II ended. His love of flying remained with him for the rest of his life. Also did his love of nature. He was an avid Boy Scout, achieving the rank of Eagle Scout with three Palms; he later served as a Boy Scout Leader and a Sea Scout Master. His awe at the majesty and beauty of God’s mountains led to many family camping and hiking adventures in the great national parks of the Western United States, where the Grand Tetons in Wyoming held a special place in his heart. Perhaps his most treasured outdoor love was for the Great Smoky Mountains of Gatlinburg, Tennessee, where he shared many memories with his family, especially in his beloved Villa Tavia chalet. Music was another of his passions, especially operas and musicals such as “The Sound of Music” and his favorite “Fiddler on the Roof.” A man of tradition, Russell’s faith, hard work, generosity and dedication to his family were among his defining characteristics and will be cherished forever. His generosity, though quiet, was experienced by many. His belief that everything he owned was a gift from God compelled him to share his blessings with others in humble ways. Of his family, he kept an ongoing spreadsheet to keep tabs on its quickly growing size, and he delighted heartily when the list of his kin numbered over 100. Nearly every Sunday an abundance of laughter, love and children spilled out of his home. The melodies of classical music, hymns of prayer, and odes of love and thanksgiving from his family filled his final days. His memory will live on in their hearts forever, and his soul is now entrusted to God’s infinite love and mercy for eternity. The family would like to thank his caregivers for their loving kindness, friendship and care for June and Russel. Special thanks to Beth Naquin, Cindy Harris, Gina Weber, Tara Courrege and more recently, Alicia Smith and Mandy Burris. Also, many thanks to Notre Dame Hospice Staff for their care and service, especially Alicia. Relatives and friends are invited to the Funeral Mass at Saint Peter Catholic Church, 125 E 19th Avenue, Covington, LA 70433 on Tuesday, February 2, 2021 at 12 Noon with visitation from 10:00 AM until Mass time. For those unable to attend, the service will be streamed at https://youtu.be/kYYxHDSoCJU. Interment will follow the Mass at St. Joseph Abbey Cemetery, 75376 River Road, St. Benedict, LA. 70435. In lieu of flowers, please send donations to the American Cancer Society, the Dementia Society of America and/or EWTN Global Catholic Network. Please Share a Memory on the Tribute Wall at www.ejfieldingfh.com.

Russell Francis Hendrick, age 93, was called to the Lord on Tuesday, Jan. 26, 2021. He died peacefully at home surrounded by his loving family. He was a family man, an entrepreneur, a nature and music enthusiast, and, as a life-long Catholic,... View Obituary & Service Information

The family of Russell Francis Hendrick created this Life Tributes page to make it easy to share your memories.

Russell Francis Hendrick, age 93, was called to the Lord on Tuesday,...

Send flowers to the Hendrick family.