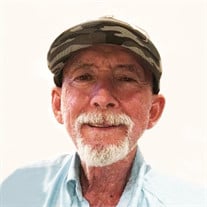 Roy J. “PawPaw” Duplantis, age 74, was born in New Orleans, Louisiana on December 28, 1945 and resided in Madisonville, Louisiana. As a loyal servant of God, he entered Heaven’s gates on September 5, 2020. Roy was a loving father, brother, grandfather, great grandfather, uncle, cousin, friend, colleague, and mentor. Most importantly, Roy was a disciple of Christ. He was a member of Church of the King in Mandeville and loved to participate in small group and Bible study. His journey in life led him to make the most important decision that anyone can make. He gave his heart to the Lord. That decision greatly impacted the lives around him. He was a faithful witness of the Lord to his family and friends in conversation and in his love for worship. He was a plumber by trade and a member of the Plumber and Steamfitters’ Local Union No. 60 for 56 years. He loved to mentor and share his trade. He believed in being meticulous in his work and charging fairly, as he wanted it to be pleasing to the Lord. He made many friends and long-lasting customers as a plumber and loved to share his faith during his time on the jobs. Roy loved spending time outdoors. His desire to fish and play golf became his love of leisure. His passion for both was implemented early on in his family which led to a lifetime of memories. Roy was predeceased by his father and mother, Ray Duplantis and Anne Peyroulet Duplantis. He was also predeceased by his twin brother, Ray Duplantis, his sister, Susan Duplantis, and son-in-law, Mark Ahlberg. Roy is survived by his three daughters Kelly Ahlberg, Michelle VanBenschoten (Charlie), and Nicole O’Brien (Michael). He had nine grandchildren, Rebecca (Christian), Joshua, Jordan, Shayne, Miranda (Ethan), Jacquelynne, Dominick, Cullen, and Ava. He also became a great grandfather to Adam Charles and Eleanor “Ellie”. Roy is also survived by his brother, Kevin Duplantis (Marie), and their children, Brandon (Rachel) and Madelyn. He is also survived by a wonderful huge family of cousins, nephews, nieces, grand-nephews, grand-nieces, friends, and colleagues. A celebration of life service will be held at First Baptist Church, 16333 LA-1085, Covington, LA 70433, on Saturday, October 10, 2020. Family will start receiving guests at 1:00 PM in Central Hall and the service will begin at 1:30 PM. In lieu of flowers, contributions to Heart of Hospice Foundation or Hospice House in Slidell are much appreciated.

The family of Roy J. "PawPaw" Duplantis created this Life Tributes page to make it easy to share your memories.

Send flowers to the Duplantis family.