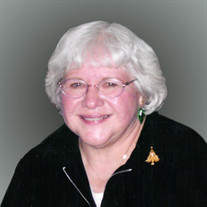 Rosemary Helen Cristadoro, age 77, of Mandeville, LA passed away peacefully on Monday, February 1, 2021. She was born on August 25, 1943 in Boston, MA to Chester and Helen Kowalczyk. Rosemary is survived by her children Kenny Cristadoro (Rona), Justine Cristadoro, and Allysson Cristadoro-Groom (Tristram); and her grandchildren Reese Cristadoro, Kendall Cristadoro, Justice Groom, Jordan Groom, and Parker Groom. She is also survived by her sister-in-law Mary Kowalczyk, niece Tracy Kowalczyk Barchard and nephew Keith Kowalczyk. Rosemary is preceded in death by her brother Chester “Terry” Kowalczyk and her parents. Rosemary was a most generous and kind-hearted woman. She dealt with a lot of adversity in her life and yet she always maintained a positive attitude and an ever present smile. Her life was made up of modest successes but compiled together they amounted to a huge life full of love, kindness and emotional riches. She was born in Boston but considered New Orleans her home ever since she moved here in 1977. The group of friends she found here were such an important influence on the woman she was. In addition to her children and grandchildren, of which she couldn’t be prouder, some of the other things that she took pride in were; being owner of a Tastee Donuts franchise in New Orleans and working in various industries as a excellent bookkeeper, especially her time at Powell Insurance. She also worked at iconic New Orleans companies like Dorignac’s and Dixie Beer. She suffered a lot post-Katrina but those hardships landed her at Roquette Lodge, a residential community in Mandeville, where she was a leader and a friend to everyone there. She was elected as Treasurer and Co-President of their Lodge community. She was considered the “illegal bookie” for the football pools, and the in-house transport for anyone who needed to go anywhere for any reason. Rosemary was a woman who positively impacted anyone who was lucky enough to know her. She will be deeply missed by grief stricken family and friends every day. A celebration of life will be held at Elks Lodge, 2215 Cleary Ave, Metairie, LA 70001 on Saturday, February 27, 2021 from 1:00 Pm to 4:00PM. The Cristadoro family invites you to share thoughts, fond memories, and condolences online at E. J. Fielding Funeral Home Guest Book at www.ejfieldingfh.com.

Rosemary Helen Cristadoro, age 77, of Mandeville, LA passed away peacefully on Monday, February 1, 2021. She was born on August 25, 1943 in Boston, MA to Chester and Helen Kowalczyk. Rosemary is survived by her children Kenny Cristadoro (Rona),... View Obituary & Service Information

The family of Rosemary Helen Cristadoro created this Life Tributes page to make it easy to share your memories.

Send flowers to the Cristadoro family.