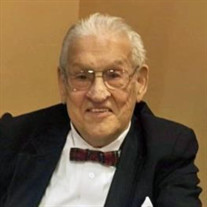 Ronald Francis Plaisance, Sr. was reunited in eternal life with his beloved wife, Ruth Bernice Wood Plaisance of Cincinnati, Ohio on January 13, 2021. Ron lived by the code God, family, country. His deep commitment to his Catholic faith was unwavering and the cornerstone of his life. A retired attorney, he belonged to far too many civic and social organizations to list. However, it was his role as an officer in the Krewe of Carrollton that united his family and friends each year for a glorious fun-filled weekend of revelry, merriment, and shenanigans. As patriarch of a very large family, he was a fixture at every family gathering, wedding, funeral, sporting event, dance review, and gymnastic meet. He was happiest when surrounded by loved ones. A man of few words, he avoided the limelight and would never speak of his vast professional accomplishments. However, when it came to his family he would brag and boast about his children, his grandchildren, and his numerous nieces and nephews to anyone who would listen. He was a graduate of Holy Cross High School, class of 1947. He received his undergraduate degree from Southwestern Louisiana Institute in Lafayette, and his law degree from Loyola University. Ron retired as a Commander in the United States Navy and served in the Korean Conflict. He was born on January 19, 1931 in New Orleans, LA to the late Claytus Joseph Plaisance, Sr. and Valerie Elizabeth Shally Plaisance. He was the loving father of Ronnie Plaisance, Jr. (Dawn), Rhoda P. Blaum (Gregory), and Rebecca P. Seale (Clayton). Ronald was the proud grandfather of Samantha Plaisance, Brittani P. Carson, Taylor Plaisance, Abigail Blaum, Patrick Blaum, Andrew Seale, Joshua Seale, and David Seale. He was the brother of the late Claytus J. Plaisance, Jr., Donald J. Plaisance, and Lloyd B. Plaisance. * Due to COVID-19 restrictions, social distancing and masks are required to attend services.* Relatives and friends are invited to the Funeral Mass at Our Lady of the Rosary Catholic Church, 3368 Esplanade Ave, New Orleans, LA 70119 on Saturday, January 16, 2021 at 11:00 AM with visitation from 10:00 AM until Mass time. Interment will follow the Mass at St. Vincent de Paul Cemetery, New Orleans, LA. In lieu of flowers, donations may be made to Holy Cross School, www.holycrosstigers.com. Please Share a Memory on the Tribute Wall at www.ejfieldingfh.com.

The family of Ronald Francis Plaisance, Sr. created this Life Tributes page to make it easy to share your memories.

Ronald Francis Plaisance, Sr. was reunited in eternal life with...

Send flowers to the Plaisance family.