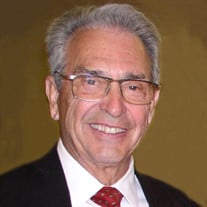 Roland J. Hymel, Jr was called to his eternal home on Saturday, September 4, 2021 peacefully at the age of 91 surrounded by his family. He was preceded in death by his parents, Roland and Mildred Hymel, his sisters, Marie Weidner (Edward) and Kathleen Shirer (survived by Joseph). He is survived by his loving and devoted wife, Mary Ann Hymel, his children, Roland III (Robyn), Rick (Beverly), Randy (Charlotte) and Mary Piper (J.R.). He is also survived by 10 grandchildren, Cassidy Hymel (Chantel), Shawn Hymel, Margaux Hymel, Roland Hymel IV, Jason Piper (Elizabeth), Rhett Hymel (Lindsay), Jack Hymel, Randall Hymel, Connor Clarke, and Mary Grace Carr (Nicholas), five great grandchildren, and numerous nieces and nephews. He is survived by his siblings, Edmee Baird (late Joseph), Elizabeth Eckert (Richard), and Patrick Hymel (Jamie). Roland was born on July 10, 1930 in New Orleans. He graduated from Holy Cross High School in 1949 and was awarded Man of the Year in 2018. He graduated from Loyola University of New Orleans and received his Bachelor of Science degree in 1953 in Marketing. At Loyola he was a member of the Blue Key National Honor Society, a Cadet Colonel in the ROTC, and first lieutenant MPC-USAR in the Army. In 2002 Loyola awarded Roland the Business Alumni of the Year. Roland Hymel, Jr. began his career in the life insurance and benefits industry as a personal producer. He founded the Roland J. Hymel Agency, Inc., Financial Planning Center and Fringe Benefits Administrators, Ltd in 1960. He served as the New Orleans General Agent for a multi-billion dollar insurance carrier in which time he won numerous company and national awards, including the highest honors for volume, premium and manpower development. Roland earned his CLU® designation and Masters of Finance from the American College. He was certified in Pensions and Executive Compensation, Advanced Estate Planning, American Society of Pension Actuaries, Employee Benefit Plans, Advanced Pension Planning, Chartered Financial Consultant, and Registered Health Underwriter. He was also listed in City Business Top 20 Entrepreneurs in 1982. Under his leadership, the Roland Hymel Agency, Inc. and Fringe Benefit Administrators, Ltd. became the first fully-computerized entities of their type in the country. Roland is cited in Who’s Who in Finance and Industry, and is nationally renowned for his pioneering work in tax-sheltered trusts. He was the mastermind in the development of the Executive Income Plan, a tax-sheltered, deferred-compensation benefit program for select executives, which was first copyrighted in 1977 and again in 1982. Roland was one of the founding members of the Krewe of Bacchus and a former Board Member, a Lion’s Club President, International House Board of Directors, a member of Beau Chêne Country Club, and member of Manresa for over 50 years. He was an avid golfer throughout his life and had a love for his home in Waveland, MS and enjoyed entertaining his family and guests alike. He was also awarded for naming the New Orleans Saints Football team in 1966. Due to COVID-19, social distancing is encouraged and masks are required to attend services. Relatives and friends are invited to attend the funeral services at Mary Queen of Peace Church, 1501 W. Causeway Approach, Mandeville, LA on Saturday, September 11, 2021 at 11:00 AM with visitation on Saturday beginning at 10:00 AM. A private interment will follow at Greenwood Cemetery. In lieu of flowers, donations may be made in Roland’s memory to the Alzheimer’s Association, www.alz.org. The family invites you to share thoughts, fond memories, and condolences online at E. J. Fielding Funeral Home Guest Book at www.ejfieldingfh.com.

Roland J. Hymel, Jr was called to his eternal home on Saturday, September 4, 2021 peacefully at the age of 91 surrounded by his family. He was preceded in death by his parents, Roland and Mildred Hymel, his sisters, Marie Weidner (Edward) and... View Obituary & Service Information

The family of Roland J. Hymel Jr created this Life Tributes page to make it easy to share your memories.

Roland J. Hymel, Jr was called to his eternal home on Saturday,...

Send flowers to the Hymel family.