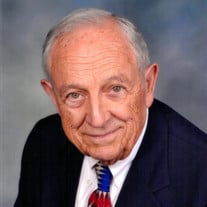 “I have fought the good fight, I have finished the race, I have kept the faith.” 2 Timothy 4:7 Robert George Morgan, a native of New Orleans and resident of Mandeville, was called home to the Lord on Wednesday, March 10, 2021 at the age of 89. Beloved husband of Argiro Louchis Morgan; dedicated and loving father of Robert T. (Alana), Michael G. (Christine), John S. (Margaret), and Matthew J. (Heather). Beloved grandfather of Judith L., Jared R. (Christine), Daniel D. (Jamie), Emily Morgan Harris (John), Michael J., Benjamin R., Anne K., Joseph D., David M., William E., Noah M., and Eli J.; and great grandfather of Madeline J. and Eric J. Morgan, and Robert M. Harris (expected June 2021). Robert was preceded in death by his parents, George Michael Morgan and Barbara Stechman Morgan, his sister Barbara M. Laverty, his brother Keith S. Morgan, his baby grandson William E. Morgan, and his daughter-in-law Heather Morgan. Robert graduated from Jesuit High School in 1947 and from LSU in 1952 with a degree in chemistry. He served as the treasurer of Theta Xi fraternity where he met his beloved, Argiro, during his senior year. He served two years in the Air Force Atomic Energy Division and completed eight years in the Air Force Reserves. He attained the rank of Captain. He had a 32-year career at D. H. Holmes and served as the Sr. Vice President in charge of human resources, security, and central operations. During his tenure, D. H. Holmes expanded from one store on Canal St. to twenty stores in four states. His name is memorialized on a plaque on Canal St. to recognize his service to the community: Chair of the CBD division of the Chamber of Commerce, a member of the Committee of the Redevelopment of the Warehouse District, a board member for The United Way, President of the Board of Lafreniere Park, a member of the New Orleans Regional Leadership Institute for young professionals, President of the Board of Directors for St. Paul’s Episcopal School, a member of the Board of Christopher Homes for the Elderly, and an advisory board member for Xavier University. Upon retirement, he started SCORE, a mentoring chapter for young entrepreneurs on the North Shore. He also served on the fundraising committee for St. Peter’s Catholic Church in Covington. He served as President of the St. Tammany Republican Men’s Club and established the first annual gala event for Republicans in the area, which has continued to date as the Lincoln-Reagan Annual Dinner. He was also an active member of the St. Tammany Library Foundation. He was a member of the Beau Chene Country Club in Mandeville where he was an active member of the Big Cahoonas golf club for many years. His many lifetime hobbies included furniture making, bowling, dancing, golf, toast masters, gardening, architectural home design, bridge, a love for the automobile, and LSU football. Robert was the cornerstone of the family. He led both young and old. All knew he could be counted on for his honesty, dependability, moral judgment, and conscientiousness. He dearly loved his wife, their four sons and their families. In lieu of flowers, donations may be made to: Father Bill McGeogh’s Foundation for the Endowment of the Eucharistic Chapel at St. Peter’s Parish, at 125 E. 19th Avenue, Covington, LA, 70433, and Congenital Diaphragmatic Hernia International, 3650 Rogers Road, No. 290, Wake Forest, NC 27587. Due to COVID-19, social distancing is encouraged, and masks are required to attend services. Relatives and friends are invited to attend the funeral services on Saturday, March 20, 2021 at 11:00 AM with visitation beginning at 9:00 AM at E.J. Fielding Funeral Home, 2260 W. 21st Avenue, Covington, LA 70433. Burial will follow in St. Joseph Abbey Cemetery, 75376 River Road St. Benedict, LA 70457. E.J. Fielding Funeral Home is in charge of arrangements. Please write your memories of Robert on the E.J. Fielding Funeral Home Online Guest Book at www.ejfieldingfh.com.

&#8220;I have fought the good fight, I have finished the race, I have kept the faith.&#8221; 2 Timothy 4:7 Robert George Morgan, a native of New Orleans and resident of Mandeville, was called home to the Lord on Wednesday, March 10, 2021 at... View Obituary & Service Information

The family of Robert George Morgan created this Life Tributes page to make it easy to share your memories.

“I have fought the good fight, I have finished the race, I have...

Send flowers to the Morgan family.