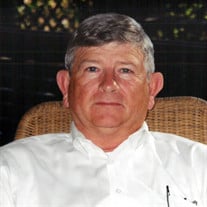 Robert Earl Hilburn, a longtime resident of Maplewood Subdivision in Abita Springs, LA died unexpectedly on Monday, September 20, 2021 in Covington, LA. He was born on January 9, 1943 in Tuscaloosa, AL to the late Leo Hilburn and Dorothy Robertson Hilburn. Robert was married to the love of his life, the late Cheryl McGuffey Hilburn, for 52 years. He joined her in heaven exactly one month after her passing. He was theloving father of Amy Hilburn Robinson, Christie Hilburn Kolb (Clayton), Shelley Hilburn Peak (Rodney), Bree Singleton and Freddie Mack Kinard (Darlus). Robert was the proud grandfather of 11 grandchildren and 2 great-grandchildren on the way. He was the brother to Thomas Hilburn (Mary Lee) and Marian Hazlip (Kirk). He will be missed by numerous family members and friends. Robert proudly served his country in the Air Force during the Vietnam War and afterwards received his Bachelor of Science in Business Administration from Louisiana Tech University. He started his working career with the Walmart Corporation and was proud to have opened some of the first Walmart stores in Arkansas. In 1972 Robert and his family moved to Louisiana and started his surety career. He retired from CAN Surety in 2008 after spending 36 years in the business. Upon retirement, Robert and Cheryl took many trips in the 5th wheel camper visiting family and friends, and he especially enjoyed his weekly Popeye’s Chicken lunch with his close friend, Larry Lloyd. Due to COVID-19, social distancing is encouraged and masks are required to attend services. Relatives and friends are invited to attend the Funeral Service at First Baptist Church Covington Chapel, 16054 Murphy Road, Covington, LA 70433 on Thursday, September 30, 2021 at 2:00 PM with visitation on Thursday beginning at 12:00 PM until service time. Interment will follow services in Abita Springs Cemetery, 12th & St. John Street, Abita Springs, LA 70420 E. J. Fielding Funeral Home has been entrusted with the arrangements. The family invites you to share thoughts, fond memories, and condolences online at E. J. Fielding Funeral Home Guest Book at www.ejfieldingfh.com.

The family of Robert Earl Hilburn created this Life Tributes page to make it easy to share your memories.

Send flowers to the Hilburn family.