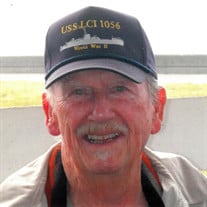 Robert Maitland “Bob” Dodson passed away on Friday, October 2, 2020 surrounded by family at his home in Mandeville, LA. He was born on September 3, 1926 in New Orleans, LA to the late Orion B. Dodson and Janie Maitland Dodson. Bob was the beloved husband of the late Alberta Christine Fayard of Pass Christian, MS for 66 years. He was the loving father of D. Christine Dodson, Shelly D. Jones, Robert O. Dodson (Becky), Albert R. Dodson, and the late Keith D. Dodson. Bob was the proud grandfather of Lylee Dodson-Lowry, Rob Dodson, Chrissy Pritchard, and Keith Dodson; great-grandfather of Pierson, Luci, Adair, and Hadley. Bob was a native of New Orleans from the Lakeview neighborhood. His enthusiastic and adventurous spirit led him to leave New Orleans in 1942, at the age of 16, and venture out to Logan, Utah where he worked with other young men to repair B-24 airships damaged in the War. At 17, he enlisted in the Navy where he learned semaphore and Morse code and earned the rank of Signalman. He saw action in the Philippine Campaign aboard the LCI 952 and 1056 from 1943-45. After the Japanese surrender he finished out his active service in March of 1946 at the Pearl Harbor Naval Base. After the war he joined the Naval Reserve and enrolled at Southwestern Louisiana Institute (now the University of Louisiana Lafayette) where he earned a degree in Business Marketing in 1953. Dodson secured a job with The Texas Company (TEXACO) unloading box cars and driving a tanker truck in 1953. His energetic work ethic and love of people gained him a position in Consumer Sales and Marketing. He worked for Texaco in various sales/marketing positions in Mississippi and Louisiana rising to the position of Assistant Division Manager in the New Orleans office. He retired in 1987 after 34 years with the company. Bob enjoyed duck hunting and fishing in his home state of Louisiana. He built a camp at Grand Isle after retirement so his wife Alberta “Peaches” and he could relax and enjoy their time together along with the rest of the family and friends. Bob was a Range Officer at the Honey Island Shooting Range near Pearl River, LA. He was an early morning regular for 27 years on the Northshore Lakefront walking path always wishing a “good morning” and “have a nice day” to everyone he met. He never missed a visit with the GAZEBO KREWE. Bob was a member of St. Michael’s Episcopal Church in Mandeville where he worshiped Our Lord and began learning more about the theology of his faith. He enjoyed church on Sunday and the visits with his fellow members. Relatives and friends are invited to the Funeral Service at E.J. Fielding Funeral Home, 2260 W. 21st Avenue, Covington, LA 70433 on Monday, October 12, 2020 at 11:00 AM with visitation from 9:00 AM until service time. Interment will follow the service at Pinecrest Memorial Gardens, Covington, LA. In lieu of flowers, donations may be made to St. Jude Children’s Research Hospital, www.stjude.org. Please Share a Memory on the Tribute Wall at www.ejfieldingfh.com.

Robert Maitland &#8220;Bob&#8221; Dodson passed away on Friday, October 2, 2020 surrounded by family at his home in Mandeville, LA. He was born on September 3, 1926 in New Orleans, LA to the late Orion B. Dodson and Janie Maitland Dodson. Bob... View Obituary & Service Information

The family of Robert Maitland Dodson created this Life Tributes page to make it easy to share your memories.

Send flowers to the Dodson family.