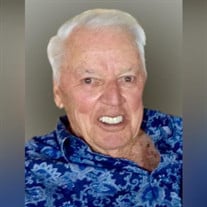 Robert Charles Case passed away on Thursday, February 18, 2021 at the age of 90. Robert “Bob” was born in New Orleans and was a lifelong resident of New Orleans before moving to the Northshore. Bob met and married Francis Ann Noble on June 9, 1951, and they were happily married for 62 ½ years. Bob was preceded in death by his wife, Fran. He was the beloved father of Robert C. Case, II and Catherine Case Larson (Richard). He is survived by his grandchildren Jennifer Case Floyd (Chris) and Stephanie Case Lyon (Wade) and his great grandchildren Tilman and Addison Floyd, Avarie and Morgan Lyon along with many nieces and nephews and his sister Peggy Case Aertker. Preceding him in death is his mother Thelma Brady Case and father Leslie Bennett Case, his sisters Beverly Andry and Mary Ellen Richards and his brother Ben Case. Bob was a loving son and the youngest of five children. Bob graduated from Alcee Fortier High School and went on to attend Louisiana State University where he joined Kappa Alpha Fraternity. He earned his degree in Accounting and spent his career working for Exxon. He was one of the lucky ones who was able to retire at age 55. Bob was retired more years than he worked. Bob was a devoted father who loved fishing, sailing and boating along with spending time with the family. Over the years Bob especially enjoyed their six years in Grand Isle along with trips to Gulf Shores and Charletson. After retirement, he became an avid golfer. He spent years learning the game and had his “Hole in One.” Bob also participated in Golf charity events, and was a man who generously enjoyed giving to others. Bob’s many and varied volunteer roles in the community truly reflected his servant’s heart. Bob was active in the growth of the Louisiana Republican Party in the 60’s and 70’s. He volunteered for 17 years at Heritage Manor calling Bingo and was quick to give a warm smile along the way to everyone he passed. Bob served on the Woodcrest and Beau Chene HOA Boards. Bob spent the last six years as a devoted volunteer at St. Tammany Hospital in Covington. He was still volunteering in December 2020. Bob cherished spending days with his very special and dear friend Joyce Allgood. It was wonderful to have Joyce in our life because she was Fran’s best friend. Bob always had a smile on his face, a positive attitude, and tons of energy. He was a thoughtful individual who valued friendships and was a great listener. Bob was a special man with an unmistakable zest for life and you were lucky to be his friend! Service will be held on Friday, February 26, 2021, St. Timothy Methodist Church 335 Asbury Dr, Mandeville, LA 70471 ~ Service at 11AM ~ Visiting Family 10AM. In lieu of flowers please donate to a charity of your choice, or Methodist Children’s Home, 23515 Hwy 190, Mandeville, LA 70488 or Mended Little Hearts, 1500 Dawson Road, Albany, GA 31707

Robert Charles Case passed away on Thursday, February 18, 2021 at the age of 90. Robert &#8220;Bob&#8221; was born in New Orleans and was a lifelong resident of New Orleans before moving to the Northshore. Bob met and married Francis Ann Noble... View Obituary & Service Information

The family of Robert C. Case created this Life Tributes page to make it easy to share your memories.

Send flowers to the Case family.