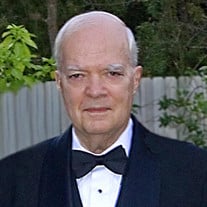 Richard Webster Leche, Jr. of Covington, LA passed away on Saturday, November 28, 2020. He was born on September 29, 1929, in New Orleans, LA to Richard Webster Leche, Sr. (a former Governor of Louisiana), and Elton (Reynolds) Leche. Richard is survived by his daughter Laura Leche Bailey and his brother, Charles Eustace Leche. Richard is preceded in death by his beloved wife Mary Ann Crnkovic Leche and his parents. Richard attended Covington High School, where he became president of the class of 1946, the first class to graduate from the newly-named school. He enrolled in the University of the South at Sewanee. After three years at Sewanee he enlisted in the United States Air Force, wherein he served for two years during the Korean War. Upon return to Louisiana, he enrolled at LSU. There he continued his studies and was a member of the Kappa Sigma fraternity. He graduated from LSU in 1954 with a BA degree in political science. After college, and with a love for travel, he went to work in the airline industry, being employed successively with Eastern, Pan-American and Delta. This career took him from New Orleans to Houston, Miami, Washington DC and Atlanta. Retirement came in 2004. Richard survived, though with severe injuries, an automobile accident in 2008. After partial rehabilitation, he resided at Christwood (Covington, LA) until his death. Due to COVID-19 guidelines, social distancing is encouraged and masks are required to attend services. Relatives and friends are invited to attend the funeral services at E.J. Fielding Funeral Home, 2260 W 21st Ave, Covington, LA 70433 on Sunday, December 6, 2020 at 2:00 PM with visitation on Sunday beginning at 12:30 PM. Interment will follow the services in Pinecrest Memorial Gardens, Covington, LA, adjacent to the funeral home. In lieu of flowers, memorial contributions in memory of Mr. Leche may be made to the Christwood Foundation. Donations can be made online at https://christwoodrc.com/foundation/ Please sign the E.J. Fielding Funeral Home online Guest Book at www.ejfieldingfh.com.

The family of Richard Webster Leche, Jr. created this Life Tributes page to make it easy to share your memories.

Send flowers to the Leche family.