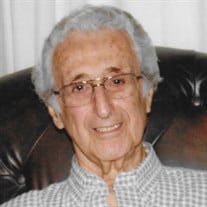 Dr. Richard Margoles Hirshberg passed away on Wednesday, January 27, 2021 in Covington, Louisiana. He had lived in Houston, Texas since 1954 having moved to Covington shortly before his passing to be with family. He was born on November 20, 1931 in Springfield, MA to the late Irving Hirshberg and Eva Margoles Hirshberg. Richard is survived by his loving wife Jacklyn Sonnier Hirshberg of 45 years; daughter Eva Hirshberg Heintz and son-in-law Dr. Jay William Heintz; mother in law Martha Lane Sonnier; and beloved granddaughters Sadie Lee Heintz, Lucy Richard Heintz and Harper Tuesday Heintz. Dr. Hirshberg practiced neurosurgery in Houston, Texas for 30 years. Caring for his patients and alleviating their pain was his life’s work and passion. He often referred to his calling to medicine as a “magnificent obsession.” Dr. Hirshberg lived a life of true service dedicated to the care of others. Dr. Hirshberg completed his undergraduate degree at Brandeis University graduating Cum Laude with distinction in Biology in 1953 followed by a year of graduate studies in biochemistry at the University of Massachusetts. In 1959 he received a degree in medicine with honors from Baylor University College of Medicine in Houston, Texas. Dr. Hirshberg completed a surgical internship at Barnes Hospital in St. Louis, Missouri and a residency in neurosurgery at Baylor College of Medicine and Columbia University in neuropathology. He was a Lieutenant in the Naval Reserves from 1955 to 1972. Dr. Hirshberg was the Clinical Chief of Neurosurgery at St. Joseph’s Hospital in Houston from 1964 to 1990. He was Chief of Staff at St. Joseph’s from 1984-1985. The mission of the Sisters of Charity at St. Joseph’s Hospital was near and dear to his heart. He was the chief of the neurosurgery residency program at St. Joseph’s Hospital from 1964 to 1993 and truly loved training the next generation of dedicated surgeons. From 1964 to 1993 Dr. Hirshberg was on the staff of The Methodist Hospital, Hermann Hospital, St. Luke’s Hospital, Texas Children’s Hospital, and M.D. Anderson Hospital in Houston, Texas. After his retirement in 1993, Dr. Hirshberg spent time writing, researching, and speaking on the topics of pain as well as “shaken baby” syndrome. He developed a midline myelotomy procedure for the alleviation of pelvic cancer pain involving a novel pathway in the spinal cord. Richard treasured his many friendships in Houston and around the country and world. He leaves a legacy of compassion, service, and love that will never be forgotten. The family will hold a private memorial service. In lieu of flowers, donations in memory of Dr. Richard Hirshberg may be made at Baylor College of Medicine. Please donate online at www.givebmf.org/hirshberg-memorial. E. J. Fielding Funeral Home, Covington, LA, is in charge of arrangements. Please Share a Memory on the Tribute Wall at www.ejfieldingfh.com.

Dr. Richard Margoles Hirshberg passed away on Wednesday, January 27, 2021 in Covington, Louisiana. He had lived in Houston, Texas since 1954 having moved to Covington shortly before his passing to be with family. He was born on November 20,... View Obituary & Service Information

The family of Dr. Richard Margoles Hirshberg created this Life Tributes page to make it easy to share your memories.

Send flowers to the Hirshberg family.