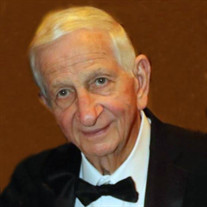 Richard Guidry, 87, was called by our heavenly Father at his residence in Covington surrounded by his loving family on Wednesday afternoon August 4, 2021. He was born on January 27, 1934 in Breaux Bridge, La and resided in Covington, La for the past 30 years. He is survived by his beloved Patty Ballard His two loving children Kevin Guidry and Jennifer Guidry Giittinger and her husband NIck, along with step children Jennifer Ballard Gitz(Ronnie), Paul Ballard(Torry), Steve Ballard(Lori), Scott Ballard(Kristi), and Julie Ballard Clark(Jay). Five grandchildren: Ashley McDonald (Casey), Kathryn Grimble (Steve), Myka Ferguson (Travis), Lauren McKenzie Guidry, Holden Guidry. Seven Great Grandchildren: Collin Thibodeaux, Tanner Grimble, Carsyn McDonald, Carolyn McDonald, Knox Ferguson, Nixon Grimble, and Sloane Ferguson. Seventeen Step Grandchildren: Audrey Gitz, Mary Grace Gitz, Harrison Gitz, Brooks Ballard, Tatum Ballard, Paxton Ballard, Lila Cate Ballard, Skylar Ballard, Jack Ballard, Dylan Ballard, Sierra Ballard, Sydney Ballard, Ethan Ballard, Cole Clark, Kinsey Clark, Andrew Morse, and Peter Morse. He was preceded in death by his mother, Mabel Gallagher Guidry, father Mephew Guidry; 2 sisters Barbara Guidry and Gerry Guidry Clooney; 1 brother Terry Guidry; grandaughter Lauren McKenzie Guidry He was a veteran of the US Air Force having served in the Korean War. He was a member of the Automotive Dealers Assn., and University of Southwest LA Red Coat Club. Richard was employed in the automotive industry for the past 60 years where he was a mentor to many. He never met a stranger and could carry on a conversation with anyone. He was an entertainer at heart and loved telling stories to anyone who would listen. He always maintained a very strong faith which carried him through the last days of his life. His legacy, love, kindness, and gratitude will always live on in our hearts. Kevin and Jenny would like to extend a special thank you to Jennifer, Paul, Steve, Scott, and Julie for their unending love and compassion and support of Richard throughout the years. Relatives and friends of the family are invited to attend the funeral services at The Chapel at First Baptist Church of Covington, 16054 Murphy Rd., Covington, LA 70433 at 11: 00 AM. Visitation, at the chapel, from 9:00 AM until service time. We are so very thankful for the care and support that was given through the final days of our beloved Richie. In Lieu of flowers a donation to St. Tammany Hospice Hospital at 725 W. 11th Ave Covington, La 70433 or to St. Jude Childrens Research Hospital 501 St. Jude Place, Memphis, TN 38105 ([email protected]) Share a memory on the tribute wall at www.ejfieldingfh.com

Richard Guidry, 87, was called by our heavenly Father at his residence in Covington surrounded by his loving family on Wednesday afternoon August 4, 2021. He was born on January 27, 1934 in Breaux Bridge, La and resided in Covington, La for... View Obituary & Service Information

The family of Richard Guidry created this Life Tributes page to make it easy to share your memories.

Richard Guidry, 87, was called by our heavenly Father at his...

Send flowers to the Guidry family.