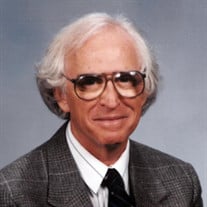 Richard Jay Elliott passed away on Sunday, January 24, 2021. He had lived in Covington, LA for 15 years. Richard came to New Orleans in 1966. He was born on February 25, 1933 in New London, CT to the late Ira J. Elliott and Conchetta Payne Elliott. Richard was the beloved husband of Margaret Ann Carter Elliott for 61 years. He was the loving father on Ron Elliott, wife Eve, and Tim Elliott. Richard was the proud grandfather of Andy, Jennifer, Matt, Angie, Nicholas, Chantal, Catherine, Amanda and Nassim. Great-grandfather of Mason, Brooklyn, Brayden, Andi, Desiree, Essam, Noah, Adam, and Naiya. He was the brother of his twin, Robert, wife Betty, of Merrimac, Mass. and brother Don, wife Arline of Middleton, Mass. Dr. Elliott served in the U.S. Army at the Ordnance Guided Missile School, Redstone Arsenal, Huntsville, AL from 1956-1958. Dr. Elliott was Professor of Educational Foundations in the Department of Educational Leadership Counseling and Foundations. He also was Associate Dean of the College of Education, University of New Orleans. He received his Bachelor of Science degree from Salem State University, Salem, Massachusetts and his Master of Arts and Doctorate from the University of Alabama. Dr. Elliott published in the area of philosophy and social science in education. He has presented many scholarly papers to the Southeast and Southwestern Philosophy of Education Societies, American Educational Research Association and the National Council for Social Studies. He served as president of the Southeast Philosophy of Education and the Louisiana Philosophy of Education Society. Dr. Elliott served as president of the Philosophy and History Education Society. He was also a founding member of the Mid-South Educational Research Association, and a fellow of the Philosophy of Education Society, an international society whose members are chosen by nomination and invitation only. He published in national and international journals and served on the editorial board of the International Review of History and Political Science Journal. Dr. Elliott served on the Southern Association of University and High School Accrediting teams and the National Accrediting Association of Teacher Education. He served as an educational consultant and evaluator to the public schools in St. Bernard Parish, Jefferson Parish, and selected Orleans Parish public schools. During the 1970’s he also served as instructional consultant for five years to the faculty of the LSU Dental School. A memorial service will be held at a later date at First United Methodist Church of Covington, 203 N Jefferson Avenue, Covington, Louisiana 70433. E.J. Fielding Funeral Home is in charge of arrangements. Please sign the E.J. Fielding Funeral Home online Guest Book at www.ejfieldingfh.com.

Richard Jay Elliott passed away on Sunday, January 24, 2021. He had lived in Covington, LA for 15 years. Richard came to New Orleans in 1966. He was born on February 25, 1933 in New London, CT to the late Ira J. Elliott and Conchetta Payne Elliott. Richard... View Obituary & Service Information

The family of Richard Jay Elliott created this Life Tributes page to make it easy to share your memories.

Send flowers to the Elliott family.