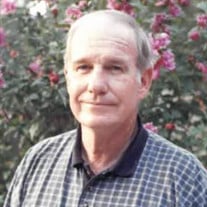 Prentiss Burnette Nettles Jr., 78, of Covington LA passed away on May 31, 2022 due to heart failure. Prentiss was universally loved by both family and friends. His gentle nature and kind demeanor won over loved ones and strangers alike and he will be greatly missed. Prentiss was born in Mississippi before moving to Louisiana. Always good-natured and hard-working, he was active in school, lauded by his teachers, and loved by friends and classmates. Notably, in his senior year of high school, he was voted “Most Athletic” and “Class Favorite.” Prentiss was also class president, co-captain of the football team and participated in a long list of extracurricular activities that spanned everything from athletics like basketball and baseball to band, beta, glee, and science club. After high school, he attended LSU where he continued to be active including singing in the school’s a capella choir. It was during this time in school that he met and later married Rhetta, his beloved wife of 56 years. Always a loving husband, Prentiss was Rhetta’s right-hand in the kitchen, garden, and especially in their many household projects. Together, they worked hard to create a warm and loving home for their family. Prentiss was a thoughtful and respectful father to his children and an involved and caring uncle to his nieces and nephews, many of whom have cherished memories of camping, going on nature outings to the creek in Mississippi, or just spending time with Uncle Prentiss and Aunt Rita. After many years working at Freeport-McMoRan as a Safety and Environmental Specialist, he retired. And true to form, he took a job at a local pharmacy after retirement to stay closer to home, and to Rhetta. Prentiss was a devoted caregiver. Spending the last twenty years patiently and compassionately supporting his wife throughout her battle with Parkinson’s disease. His desire to help others, however, extended beyond the care of his wife. He was always ready to lend a helping hand to anyone who needed it. He loved to laugh and was always joking, but never at anyone else’s expense. You would be hard pressed to hear a complaint or unkind word escape his lips. He is preceded in death by his father, Prentiss Burnette Nettles Sr., his mother, Ira Damptha Westbrook Nettles; and his sister, Alice Virginia Nettles. He leaves behind his wife, Rhetta Nettles; son, Damon Nettles and his wife, Sara Henderson, and granddaughter, Lena; daughter, Christen Nettles and her husband, James Spokes and granddaughters, Camille and Margaux; and his brother, Houston Nettles. Prentiss may be gone from this world but he lives on in our hearts and will be celebrated at a small ceremony at E.J. Fielding Funeral Home on June 11, 2022. Visitation will be from 1:00-3:00 pm, followed by a brief memorial service at the gravesite. In lieu of flowers, the family asks that you consider donating to Parkinson’s Foundation, https://www.parkinson.org/ways-to-give. E.J. Fielding Funeral Home has been entrusted with the arrangements. Please sign the E.J. Fielding Funeral Home online Guest Book at www.ejfieldingfh.com.

Prentiss Burnette Nettles Jr., 78, of Covington LA passed away on May 31, 2022 due to heart failure. Prentiss was universally loved by both family and friends. His gentle nature and kind demeanor won over loved ones and strangers alike and he... View Obituary & Service Information

The family of Prentiss Burnette Nettles Jr. created this Life Tributes page to make it easy to share your memories.

Send flowers to the Nettles family.