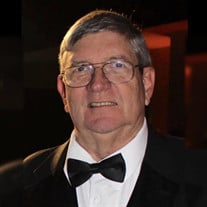 Paul Emile Frederick passed from this life on Wednesday, September 30, 2020 in Covington, Louisiana, surrounded by his wife and children. He was born on April 7, 1945 in New Orleans, Louisiana to the late Emile Frederick, Jr. and Verna Vidou Frederick. Paul was the beloved husband of Belle Bergeron Frederick for 50 years. He was the loving and devoted father of Jamie McWilliams (Paysse), Paul Frederick, Jr., Rene Frederick (Jennifer), Matthew Frederick (Tiffany), Andrew Frederick (Leah). Paul was the proud grandfather of Jacob, Catherine, David, Michael, John, and Mary McWilliams, Alexa Cheramie, Andie Rousse, Emile, James, Jean-Paul, Rene, and Thomas Frederick, and Amelia, Ellis, and Evan Frederick; great-grandfather of Lane and Lennon Cheramie. He was the brother of Amy Frederick Duffy (Charles) and Betty Frederick David (Wilfred “Boogie”) and uncle to many. Paul graduated from De La Salle High School in New Orleans in 1963 and then from LSU with a BS in Electrical Engineering in 1967. After LSU, Paul proudly served our country in the United States Air Force, flying as an engineer and navigator in the fighter jet, F-111. He married his devoted wife, Belle, in 1969, and began his family. Paul was honorably discharged from the Air Force after 4 years of service as a Captain. Soon after, he began a career with Exxon, where he worked as a Professional Engineer in Electrical and Environmental Engineering until retirement. Paul was devoted to his family and his Catholic faith. He coached little league baseball teams and loved watching his children play sports. He was an active member of St. Peter Parish in Covington, where he served on the parish council and assisted at mass as a Eucharistic Minister. In retirement, he stayed busy volunteering at the Saint Joseph Abbey’s woodworking shop, cooking meals for the Christian Brothers at St. Paul, organizing weekly rosaries for his children and grandchildren, and drinking coffee with his many friends around town. Paul was faithful Man of Manresa, attending annual retreats for decades. He was a founding member of the “10th Street Rowdies” and an avid LSU fan. All who knew him say he was a faithful man, loyal friend, and loving father. Relatives and friends are invited to the Funeral Mass at St. Peter Catholic Church, 125 E. 19th Avenue, Covington, LA 70433 on Wednesday, October 7, 2020 at 11:00 AM with visitation from 10:00 AM until Mass time. A wake will take place at E.J. Fielding Funeral Home, 2260 W. 21st Ave., Covington, LA 70433 on Tuesday, October 6, 2020 from 6:00 PM until 8:00 PM with the Rosary being prayed at 8:00 PM. Interment will follow the Mass on Wednesday at St. Joseph Abbey Cemetery, St. Benedict, Louisiana. In lieu of flowers, donations can be made to St. Joseph’s Abbey in Paul’s honor. Please Share a Memory on the Tribute Wall at www.ejfieldingfh.com.

Paul Emile Frederick passed from this life on Wednesday, September 30, 2020 in Covington, Louisiana, surrounded by his wife and children. He was born on April 7, 1945 in New Orleans, Louisiana to the late Emile Frederick, Jr. and Verna Vidou... View Obituary & Service Information

The family of Paul Emile Frederick Sr. created this Life Tributes page to make it easy to share your memories.

Paul Emile Frederick passed from this life on Wednesday, September...

Send flowers to the Frederick family.