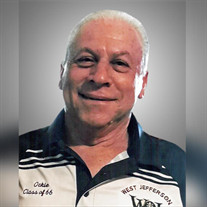 Octavio Joseph Baldassaro, Sr. departed this life on Thursday, November 12, 2020 at the age of 72. He leaves behind his loving wife, Katherine of 22 years; children, Octavio, Jr. (Charel), Brent (Crystal) and Brandi Theriot (Derek); step-children, Chris Raykiewicz (Barbara), Joe Raykiewicz, Missie Gautsch (Ty) and Jon Raykiewicz (Holly); and sister, Mary Kieff (John). He was blessed with 15 grandchildren who he adored and bragged about to anyone who would listen; Hannah Gautsch, Alexis Baldassaro, Josh Gautsch, Kaitlyn Raykiewicz, Emma Raykiewicz, Caleb Gautsch, Avery Baldassaro, Vanessa Baldassaro, Amelia Raykiewicz, Ella Theriot, Evelyn Raykiewicz, Jenna Baldassaro, Drew Theriot, Skylar Raykiewicz and Jacob Raykiewicz; and very special friends, Fritz Martin (Donna) and Claire Monson (Richard). He also leaves behind many nieces, nephews and cousins who will miss him dearly. He was predeceased by his parents, Sal and Annie Baldassaro. Octavio was a part of a very special group of men who graduated from West Jefferson High School and 55 years later they still try to get together once a month for lunch. They truly are a band of brothers. He served in the United States Army from 1966-1968 most of that time in Vietnam. Family and friends will gather at a future date to celebrate Octavio’s life. In lieu of flowers, the family requests donations in memory of Mr. Baldassaro to be made to The Gleason Foundation www.teamgleason.org .

The family of Octavio Joseph Baldassaro created this Life Tributes page to make it easy to share your memories.

Send flowers to the Baldassaro family.