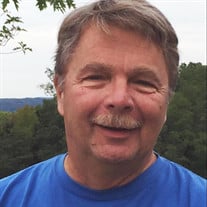 Michael Talbert Horkavi passed away on Sunday, April 3, 2022. He was born on July 30, 1948, in Phoenix Arizona to the late Victor Carl Horkavi and Ruth Carolyn Talbert Horkavi and raised in Gary, Indiana. Michael was the beloved husband of Paula Eileen Hebert Horkavi. A loving stepfather to Paul Waters and Lisa Swint (Eric), he is a proud grandfather to Lisa’s boys Eric and Jacob. He was the brother of Mary Ann McGuan (George), Martha Shorter (the late Sam), David Horkavi (the late Phyllis), Bernadette Dinehart (Marty), and Cecilia Spronz (Bill). Claiming mini-skirts were no match for textbooks, Mike left his scholarship and Purdue University to serve his country in Vietnam as a member of the 23rd “Americal” Division, 198th Infantry Brigade—a “shake and bake” sergeant in the elite 1/6 Recon group. His military decorations include the Combat Infantry Badge, the Army Commendation Medal, and, for uncommon valor, two Bronze Stars and a Silver Star. After an honorable discharge Mike returned to Northwest Indiana and began a career as a steelworker at US Steel, Gary Works. A member of the United Steelworkers Local #9321, he retired after 37 years as an electrician with I/N Tek in New Carlisle, Indiana. In 2013 Mike and Paula moved to Abita Springs in her native Louisiana. Mike was both modest and private, yet, for the many lives he touched, it was remarkable how deeply he touched them. He was a patient and loving husband, a dutiful son, and an older brother each sibling could look up to, admire, and cherish. To his stepchildren and to his many nieces and nephews he was a mentor and confidant, always ready with a smile and ever full of quiet humor and unconditional love. His co-workers knew him as we did: hard working, dependable, thoughtful—the first to give credit and last to claim it. To his fellow soldiers he might have defined what it meant to be a friend, tested in fire and found true. The Army would call him a hero. He would deny it. He’d claim he was an ordinary guy who did what he had to do. You might be the smartest guy in the room until Mike walked in. He could out play, out fight, out drink and out think all of us. Yet he left others not with envy, but with respect and admiration. He made everyone around him better. There are people gone whom we will miss, and there are a special few, like Michael, whom we will never forget. Relatives and friends are invited to the Funeral Mass at E.J. Fielding Funeral Home, 2260 W. 21st Street, Covington, LA 70433 on Saturday April 9, at 6:00 PM with visitation from 4:00 until Mass time. Internment will take place Monday, April 11th at 10:00 AM at the Southeast Louisiana Veterans’ Cemetery, 34888 Grantham College Dr., Slidell, LA, 70460. Please share a Memory on the Tribute Wall at www.ejfieldingfh.com.

Michael Talbert Horkavi passed away on Sunday, April 3, 2022. He was born on July 30, 1948, in Phoenix Arizona to the late Victor Carl Horkavi and Ruth Carolyn Talbert Horkavi and raised in Gary, Indiana. Michael was the beloved husband of... View Obituary & Service Information

The family of Michael Talbert Horkavi created this Life Tributes page to make it easy to share your memories.

Send flowers to the Horkavi family.