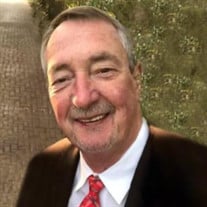 Michael Peter Donegan, age 69, passed away peacefully on Monday July 26, 2021, surrounded by his loving family. Born on December 26, 1951, he was the son of the late Cyril James Donegan and Claire Hartnett Donegan. He graduated from Brother Martin High School and after graduation, he enlisted in the United States Navy where he proudly served from 1972-1975 in the submarine diesel boat service on the U.S.S. Tiru. After completion of service, he graduated from Southeastern Louisiana University with a Bachelor of Science in Industrial Technology. He went on to enjoy a career in pest control management and was an active member of the Louisiana and Mississippi Pest Control Associations. Later in life, he joined his friends at the St Tammany Parish Assessor’s Office, where he enjoyed working as Deputy Assessor. He proudly mentored his sons, Michael Ryan Donegan and Joseph Cyril Donegan, in the development of their business, Donegan Pest Solutions. Mike was a devoted parishioner of Saint Jane de Chantal Catholic Church in Abita Springs, Louisiana. He was a chartered member of the Knights of Columbus Council #12529, where he proudly served as Past Grand Knight and as District Deputy for the State of Louisiana. His dedication to the church was recognized by the Archdiocese of New Orleans in a ceremony where he was awarded the Order of St. Louis IX Medallion in 2012. Mike was a devoted father and husband. He is survived by his wife of 20 years, Donna Donegan, sons, Michael Ryan Donegan and Joseph Cyril Donegan, daughter, Brittany Lloyd, and son-in law, Timothy Lloyd. Other surviving family members include sister-in-law, Casey Donegan, nephews, Kevin Donegan and Keegan Donegan, great-nephew, Jake Donegan, great-niece and goddaughter, Kylie Donegan, mother-in-law, Harvis Starkey, brother-in-law, Donnie Starkey and his wife, Lisa Starkey, and nephews, Trevor Starkey and Erik Starkey. He also is survived by numerous cousins, extended family, and many beloved friends. He is preceded in death by his parents, Cyril James Donegan and Claire Hartnett Donegan, his brother, James Cyril Donegan (Jim), and father-in-law, Donald Leon Starkey Sr. Relatives and friends are invited to attend the Memorial Mass at Saint Jane de Chantel Catholic Church, 72040 Maple Street, Abita Springs, Louisiana on Saturday, July 31, 2021 at 12:00 PM with visitation on Saturday beginning at 10:00 AM. There will be a Life Celebration and reception following Mass at Saint Jane Hall. Interment will be private. E. J. Fielding Funeral Home is in charge of the arrangements. Please sign the E.J. Fielding Funeral Home online Guest Book at www.ejfieldingfh.com.

Michael Peter Donegan, age 69, passed away peacefully on Monday July 26, 2021, surrounded by his loving family. Born on December 26, 1951, he was the son of the late Cyril James Donegan and Claire Hartnett Donegan. He graduated from Brother... View Obituary & Service Information

The family of Michael Peter Donegan created this Life Tributes page to make it easy to share your memories.

Send flowers to the Donegan family.