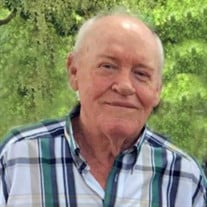 Melvin John “Red” Cardinale passed away on Monday, April 11, 2022 with his family by his side at his home in Covington, LA. He was born on March 27, 1944 in Brisbane, Australia to the late Andrea T. Cardinale and Ellen Power Cardinale. Red was the beloved husband of Cathy Sanders Cardinale for 49 years. He was the loving father of Lori Cardinale Wyle (Jason), Lisa Cardinale Dantin (Earl), Jenny Cardinale Landry (Matthew), and Melvin J. Cardinale, Jr. (Christine). Red was the proud grandfather of Zack and Zoe Wyle, Ava and Emma Dantin, Cora, Ellen, and Louisa Landry. He was the brother of Robert Cardinale (Robin), the late Philip Cardinale (the late Billie), and the late Michael Cardinale (Joycie). Red is also survived by numerous nieces, nephews, cousins, and friends. Having owned his family business of the Lawn and Saw Shop for over 34 years, Red was known for his ability to repair small engines, as well as earning lifelong customers and friends because of it. When Red was not working, he was spending time with his family. He was quick to give advice and never short on stories. To his grandkids, Paw was the best fix-it man and storyteller that ever lived. He had a nickname for every family member. He loved his family more than anything else and always preached to “never give up”. He lived this motto until his last breath. Relatives and friends are invited to the Funeral Mass at E.J. Fielding Funeral Home, 2260 W. 21st Avenue, Covington, LA 70433 on Monday, April 18, 2022 at 11:00 AM with visitation from 9:00 AM until Mass time. Interment will follow the service at Pinecrest Memorial Gardens, Covington, LA. E. J. Fielding Funeral Home has been entrusted with the arrangements. Please Share a Memory on the Tribute Wall at www.ejfieldingfh.com.

Melvin John &#8220;Red&#8221; Cardinale passed away on Monday, April 11, 2022 with his family by his side at his home in Covington, LA. He was born on March 27, 1944 in Brisbane, Australia to the late Andrea T. Cardinale and Ellen Power Cardinale. Red... View Obituary & Service Information

The family of Melvin John "Red" Cardinale created this Life Tributes page to make it easy to share your memories.

Send flowers to the Cardinale family.