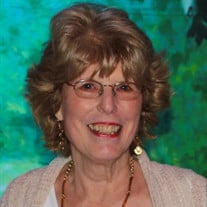 Mary Pearse Long Schlottman passed away on November 7, 2021 in Covington, LA. She was born on June 2, 1936 in Vicksburg, MS to the late Horace Taggert Long and Mary Pearse Guider Long. Mary was the loving mother of James “Jamie” Elliott Schlottman (Gianna Zaninelli Schlottman) and John Taggart Schlottman. She was the proud grandmother of Stephen E. Schlottman, James A. Schlottman, Ryan N. Schlottman, and Eugene Schlottman. Mary was the sister of Ann Isabel Jackson (James William Jackson), Zita Eloise Sandmeyer (Richard Egon Sandmeyer), and the late Horace Taggert Long, Jr. She was preceeded in death by her first husband and father of her children, the late Elliott Eugene Schlottman, Jr. and her second husband, James “Jim” Rodney Berry, Jr. Mary worked at the University of Southern Mississippi Office of Business Administration from 1981 until her retirement at age 63 in 1999. She was a devout Catholic and remained very active within her church at St. Thomas Aquinas in Hattiesburg Ms for almost 50 years. To be closer to family she moved in 2016 to Christwood Retirement Community in Covington La. She became a parishioner of St. Anselm Catholic Church in Madisonville. However, she could be found attending Sunday mass at the chapel of St. Pauls Catholic High School to watch and receive communion from her two grandsons who were then eucharistic ministers. Mary lived for her family and loved life. She was quick to tell silly jokes followed by an infectious laugh and giggle. She was always present and quick to attend every family holiday and event. She loved her “fiver” or one evening cocktail at 5pm with family and friends. She was affectionately known as Mary P, Mother Mary, Aunt Tina, Sister, Mary Pearse but her favorite titles were always Mom and Mimi. To know her was to love her and she will be forever missed. Relatives and friends are invited to the Funeral Mass at E.J. Fielding Funeral Home, 2260 W. 21st Avenue, Covington, LA 70433 on Thursday, November 11, 2021 at 2:00 PM with visitation from 12:00 Noon until Mass time. Interment will follow the service at Pinecrest Memorial Gardens, Covington, LA. In lieu of flowers, donations may be made to the Alzheimer’s Association, www.alz.org. Please Share a Memory on the Tribute Wall at www.ejfieldingfh.com.

Mary Pearse Long Schlottman passed away on November 7, 2021 in Covington, LA. She was born on June 2, 1936 in Vicksburg, MS to the late Horace Taggert Long and Mary Pearse Guider Long. Mary was the loving mother of James &#8220;Jamie&#8221;... View Obituary & Service Information

The family of Mary Pearse Long Schlottman created this Life Tributes page to make it easy to share your memories.

Mary Pearse Long Schlottman passed away on November 7, 2021 in...

Send flowers to the Schlottman family.