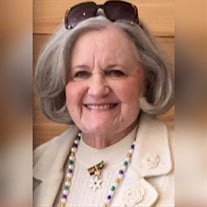 Mary Ann Hart Mayberry passed away peacefully at the age of 75, with her family by her side on February 12, 2021, in Covington, Louisiana after a courageous and valiant 3 1/2 year battle with peritoneal cancer. She was a native New Orleanian, born to the late Joseph Edward Hart, Jr. and Rose Canal Hart. Mary Ann attended grammar school at St Agnes and graduated from Mercy Academy in New Orleans in the Class of 1964. She was a member of Alpha Delta Kappa (High School) and Pi Beta Phi sororities. Mary Ann was also a renowned cook and seamstress always loving being in the kitchen. She loved to entertain friends and family, especially during the holidays. She loved to travel, near and far, loved the beaches of Florida to the mountains of Colorado and North Carolina. She loved to travel overseas as much as possible with a group of her girlfriends. She had a love of all animals: dogs (especially her Basset Hounds), cats, and Thoroughbred Racing Horses which moved the family from New Orleans to Folsom, Louisiana in 1977. She loved being a stay-at-home mother and raising her three children. She was an avid tennis player and played daily until her sight began to fail due to a rare genetic tissue disorder known as Pseudoxanthoma Elasticum Syndrome (PXE), which eventually left her blind. A lover of Mardi Gras, she rode with her late mother-in-law Dottie Mayberry in the Krewe of Venus for many years. She loved the racetrack where she was in the winner’s circle all of the time. And please don't say the word "casino" around her, it could set off a stampede. In 1982 she embarked on a new path and became a full-time real estate agent in West St Tammany from Mandeville to Franklinton. She worked for Latter & Blum in the Mandeville and Folsom offices and later for Stokes Real Estate in downtown Covington. She was a lifetime member of the Million Dollar Club, Northshore Area Board of Realtors, Northshore Women's Council of Realtors, and National Association of Realtors. She served as Board Member and President of Louisiana Land Development, a project and development in Washington Parish. She was also a member of the Northshore Republican Women's Club. She shifted work careers in the mid-1990s and began working as a Marketing Director for several Title Companies and Law Firms in west St Tammany including Landmark Title, Elite Title, Louisiana Land Title, Mahony Title, and Stone Title. She was still employed by Michael Stone and Stone Title as a Marketing Representative at the time of her death. She loved her jobs in the Real Estate/Title industry and adored all of her friends and contacts she made over her 40 years in the business. "Life is a matter of choices made at every fork in the road, and none made for an easy way to carry or lighten the load.But I’ve been strong, carried on through the fog of life; able to say I fought the good fight, did my very best, triumphed over my fears, and laid them all to rest. By my choices I still stand, for in all my chosen paths, there’s always been God’s hand reaching out to guide and comfort in each and every day, and in all my darkest hours, that grace has shone the way." - Carolyn Brunelle Mary Ann is survived by her three children: Earl Wayne Mayberry III, Kimberly Ann Mayberry, and Joseph "Joey" Edward Mayberry (Claire Lockett) of Atlanta, GA; two grandchildren: Colin Joseph Mayberry, and Caroline Drew Mayberry of Atlanta, GA; one sister, Carol Jean Hart D'Argonne (late Michael); one uncle, Joseph Canal of New Roads, LA; one aunt, Catherine Canal Maloney of Covington, LA; brother-in-laws, Richard Gary Mayberry, and Jerry Wristers, and sister-in law, Sue Ellen Sellers Mayberry; nieces and nephews: Susan Mayberry Jones (Miles) (God Mother) of Lafayette, Colorado; Richard Troy Mayberry (Michelle), Kelly Mayberry Clark (Donald); and Christopher Patrick Wristers (God Mother) (Dana) of Houston, Texas. Mary Ann's children would like to acknowledge five dear friends of our mother and our hero. Alisa Welch, Maria Jackson, Jo Ann Pisciotta, Jay Saux, MD, and Michael Stone, we thank you for the love and support shown to our mother over the last 20 years but most especially during the last 3 1/2 years while she was battling cancer. You all have been amazing and your support has helped our family more than words can ever express. With our most heartfelt gratitude, we thank you all and we love you for your unwavering devotion to our mother. The family invites all to the funeral Mass and a celebration of her life on April 10, 2021, at St. Peter Catholic Church, 125 E 19th Ave, in Covington, LA. Visitation begins at 11:00 am and the funeral mass will follow at 1:00 pm. Services will be conducted by Father Paul Hart, first cousin of Mary Ann, and a dear cousin and friend of our family. Burial will be at Lake Lawn Metairie Cemetery in New Orleans, Louisiana. In lieu of flowers or plants please make a Tax deductible donation in honor of Mary Ann Mayberry to PXE International, 4301 Connecticut Ave., NW, Suite 404, Washington, DC 20008-2369. E.J. Fielding Funeral Home is in charge of arrangements. Please sign the E.J. Fielding Funeral Home online Guest Book at www.ejfieldingfh.com.

Mary Ann Hart Mayberry passed away peacefully at the age of 75, with her family by her side on February 12, 2021, in Covington, Louisiana after a courageous and valiant 3 1/2 year battle with peritoneal cancer. She was a native New Orleanian,... View Obituary & Service Information

The family of Mary Ann Hart Mayberry created this Life Tributes page to make it easy to share your memories.

Mary Ann Hart Mayberry passed away peacefully at the age of 75,...

Send flowers to the Mayberry family.