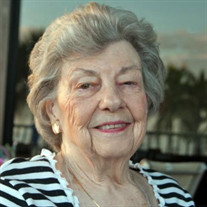 Margaret Patricia “Pat” Courtin Graham was born in Beaumont, Texas in 1927. Pat was raised in Houston by her mother Gladys Viola Cowart Courtin, an avid Houston Astros fan. Her father was Percy "Paul" Elmo Courtin of New Orleans, Louisiana. She graduated from Mirabeau B. Lamar Senior High School in Houston in August 1944. She was a book keeper for a clothing company, an insurance company, and Humble Oil before becoming a secretary for the Geophysical Area Manager of the Superior Oil Company in 1955. During midlife, Pat started to garden. The interest stemmed from spending summers with her grandparents on their Texas farm where they swept the kitchen crumbs into a hole in the floor and used an outhouse for their needs. Enthusiastically, Pat recruited her children to shovel manure from a local stable into bags so that she could “enhance” the quality of her soil, which it did. Pat, a child of the Great Depression and single parent, was adamant about raising independent children. At an early age (extremely early), Pat had her children standing on step stools to do their own laundry, load and unload the dishwasher, and corralling them around the kitchen table to make a month’s worth of lunch sandwiches (to take to school) that were frozen in the garage freezer until eaten. In her mid thirties Pat was determined to have a patio built on the back of her home and so she became a real estate agent to finance the project. Pat’s love of people and ability to perceive potential in projects gave her the ability to become a successful realtor and co-owner of All Star Realty in Algiers, Louisiana. Pat’s work ethic and dedication allowed her to provide for her children. Some of Pat’s children’s friends fondly remember her as “Mom Tom” who was always enthusiastically ready to take a late night jaunt to Cafe du Monde - even on school nights. During the hot summers in New Orleans, she spontaneously made homemade ice cream using an old wooden ice cream maker with a hand crank. Her children and those of the neighbors took turns cranking the unit to make ice cream on the back patio, a real treat during the hot summers. Pat’s zest for travel and wanderlust started after winning a trip for two to Hawaii as a prize in an agent realtor contest. She traveled both solo, family and with her late husband John Van Graham visiting Canada, Africa, Middle East, Europe, Mexico and all 50 states. Pat embodied joie de vivre and had a passion for adventure. You could find her taking train trips with her son, daughter, and grandkids, riding horses on the Baja coast, canoeing, hot air ballooning, and taking hikes with her son in nature. Even at the end of her life she enjoyed high speed wheel chair adventures in long deserted halls. Pat’s faith defined her. Throughout her life she was active in the Methodist Church and Bible studies. Her Church and faith were her foundation, and her closest friends we always those of faith. Pat believed in all forms of outreach. You could find her volunteering with Meals on Wheels, the Samaritan Center, at Hospice, her Church or taking a meal to a friend. Pat shared many good times being active in women’s clubs: Delta Women’s club, PEO, and the Red Hat ladies. The friendships sustained her. She is survived by her daughter Ann Thomas McNeal (Steve) and her son Lovick Pierce Thomas VI, M.D. (Elisabeth Sykes). She has two grandchildren, Jennifer Kimball McNeal and Margaret Lovejoy McNeal, and a stepson Steve Graham (Sandi). It was Pat Graham’s wish that any memorial tributes be made in the form of charitable donations to nonprofit Shriners Children’s Texas, 815 Market Street, Galveston, Texas 77550. Due to Covid-19 the family has decided to have a memorial service at a later date. E.J. Fielding Funeral Home is in charge of arrangements. Please sign the E.J. Fielding Funeral Home online Guest Book at www.ejfieldingfh.com.

The family of Margaret Courtin Graham created this Life Tributes page to make it easy to share your memories.

Send flowers to the Graham family.