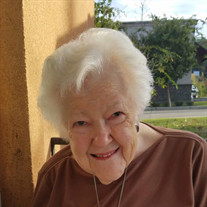 Mabel Louise Blake, age 96, of Covington, LA passed away on 16th day, August, 2021 at Christwood Retirement Community in Covington, LA. She was born on October 15, 1924 in Indianapolis, IN to Donald and Mabel Blake. Mabel survived by her 2nd Cousins Glenn Bancroft, Gill Bancroft, Gail Bancroft Gillen, Gary Bancroft and Gwyn Bancroft Watson, Marla Brownfield Lovingood, David Brownfield, Richard Brownfield, Mary Brownfield Curran and Marcia Rudolph Barrow and Bryant Rudolph. Mabel is preceded in death by her parents, first cousins and Martha Brownfield Wall. Mabel graduated George Washington University in St Louis, MO with a Masters in Geology in 1946 and was immediately hired as the first female geologist by Shell Oil Company. She worked for Shell until she retired in 2008 as the Vice President of Gulf Coast Exploration for Shell. She broke “glass ceilings” even before the term was coined. Mabel never married and was active with her cousins as “Aunt Mabel”. She lived with and cared for her parents in New Orleans, LA until they passed and remained in their family apartment until hurricane Katrina forced her to evacuate in 2005. She lived with her cousin’s widow, Del Bancroft, in Colorado until FEMA allowed her return to NOLA. She had reserved a place in Christwood Retirement Community in Covington, LA and moved into her new home in 2007. She left her Independent Living apartment and found her way to Longleaf at Christwood in 2016, where she lived comfortably until her passing. Mabel was a dedicated alumnus of George Washington University in St Louis. She was a devoted member of the Episcopal Church until she passed. Mabel was an inspiration to so many young women, helping them reach further than they dreamed and encouraging them to grow. She will be sorely missed. Due to Covid-19 restrictions a small celebration of life was held at Christwood on August 20, 2021. In lieu of flowers, memorial contributions in memory of Mabel L Blake may be made to the Christwood Foundation. Donations may be either mailed to 100 Christwood Blvd, Covington, LA 70433. The family invites you to share thoughts, fond memories, and condolences online at E. J. Fielding Funeral Home Guest Book at www.ejfieldingfh.com.

Mabel Louise Blake, age 96, of Covington, LA passed away on 16th day, August, 2021 at Christwood Retirement Community in Covington, LA. She was born on October 15, 1924 in Indianapolis, IN to Donald and Mabel Blake. Mabel survived by her 2nd... View Obituary & Service Information

The family of Mabel Louise Blake created this Life Tributes page to make it easy to share your memories.

Send flowers to the Blake family.