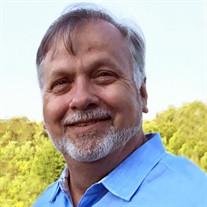 Lucien Joseph Gunter, age 58 of Covington, passed peacefully on Monday evening, December 6, 2021 at St. Tammany Parish Hospital surrounded by his family. He was born on May 15, 1963 in New Orleans, Louisiana to Lucien “Big Lou” Gunter and Dorothy Mae Johnson Gunter. He is survived by his beloved wife Colleen Pike Gunter of 31 years. He was the loving father to Trenton, Ethan and Olivia Gunter. Lucien was the youngest sibling of Jenith Larsen, Eydie Comeaux (Andrew), Mitzi Corrigan (Michael), and Lisa Barback (Dave). He is also survived by in laws Al and Diane Pike, Lisa Morin (David), Al Pike (Tara), Vicki Vitale (Matt), and a host of nieces, nephews, and friends. Lucien is preceded in death by his parents Lucien and Dorothy Gunter, sister Gale Ann Borchers, and stepmother Marilyn Gunter. A native of New Orleans and longtime resident of Covington for over 20 years, Lucien graduated from John Ehret High School and later proudly attended LSU where his love for purple and gold began. Lucien spent the entirety of his professional career in the restaurant business where he was known as everyone’s “go-to guy” for good food and even better mentorship. If people didn’t know Lucien for his crazy LSU Gymnastics attire, they knew him for his passion for serving others. He was intentional about investing in everyone he crossed paths with and bringing out the very best in each of these people. He was the first to extend his hand to anyone who needed it and always chose to love before choosing to judge. He made sure to teach his family to do the same. Lucien later went on to open the 19th Hole at Three Rivers where he served as the Director of Operations. Whether he was feeding families during the COVID-19 pandemic through his Cajun Gravy Project, sitting as a Fore Kids Foundation board member, or providing disaster relief post Hurricane Katrina and Harvey, Lucien never failed to take advantage of any opportunity he had to help those in need. Lucien was the best father and even better husband. He never missed a band concert, lacrosse game, or gymnastics meet. If he wasn’t surprising his kids with Sunday morning beignets, he was surprising Colleen with her favorite peach roses and tulips. There was no doubt he loved his family like no other and will be greatly missed by all. Relatives and friends are invited to the Funeral Service at E.J. Fielding Funeral Home, 2260 W 21st Ave, Covington, LA on Thursday, December 16, 2021 at 11:00 AM with visitation beginning at 9:30 AM until service time. The Celebration of Life will follow at the 19th Hole at Three Rivers, 1645 N Hwy 190, Covington, LA at 1:00 pm. In lieu of flowers, please offer an “Act of Random Kindness” to a stranger or someone less fortunate this holiday season. He would have adored this thought or gesture. The family invites you to share thoughts, fondest memories, and condolences online at E. J. Fielding Funeral Home Guest Book at www.ejfieldingfh.com.

The family of Lucien Joseph Gunter created this Life Tributes page to make it easy to share your memories.

Send flowers to the Gunter family.