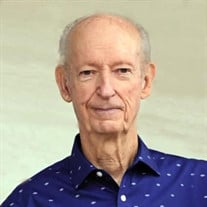 Louis Francis Zeringue Jr., age 88 of Covington, entered eternal rest peacefully on Tuesday evening, March 29, 2022 at his residence surrounded by his loving family. He was born in New Orleans, Louisiana on March 6, 1934 to Louis Francis Zeringue Sr. and Nazarine Thomas Zeringue. He is survived by his beloved wife Katherine Anderson Zeringue of 52 years. He was the loving father of Steven Zeringue (Jill) and Christopher Zeringue (Heather). He was the proud grandfather of Christian and Garrett Zeringue. Louis was the sibling of Patricia Burg (Ashton). He is also survived by a host of nieces, nephews, and lifelong friends. Louis is preceded in death by his parents Louis and Nazarine Zeringue, and his sister Beverly Kenneker (Robert). A native of New Orleans, longtime resident of Covington for over 20 years, Louis graduated from Warren Eastern High School in 1956. After high school, he attended Delgado Community College and enjoyed learning his future trade as a Structural Design Draftsman in the marine industry. Louis began and continued his successful professional career at Avondale Shipyard, C. E. Crest Engineering, and Trinity Marine. Louis married his one and only true love Katherine Anderson in 1969 at St. Rafael’s Catholic Church in New Orleans. He was family-oriented, caring, and most of all a loyal friend. He enjoyed fishing and tinkering in his shop. However, his true passion was spending time with his loving and adoring family. Louis was unique, well respected and liked, and will be deeply and dearly missed by all who knew and loved him. In lieu of flowers, kindly consider making a memorial contribution in memory of Louis Francis Zeringue Jr. to a charity of your choice. Relatives and friends are invited to the Funeral Mass at E.J. Fielding Funeral Home, 2260 W. 21st Avenue, Covington, Louisiana 70433 on Thursday, April 7, 2022 at 2:00 PM with visitation from 12:30 PM until service time. Interment for Louis will take place privately at a later date. E.J. Fielding Funeral Home locally owned and operated, (985) 892-9222 has been entrusted with funeral arrangements. The Zeringue family invites you to share thoughts, fondest memories, and condolences online at E. J. Fielding Funeral Home Guest Book at www.ejfieldingfh.com.

The family of Louis Francis Zeringue Jr. created this Life Tributes page to make it easy to share your memories.

Send flowers to the Zeringue family.