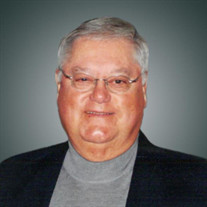 Lloyd Wallace Hayes passed away on Tuesday, April 13, 2021 in Covington, LA. He was born on September 2, 1937 in Vickery, OH to the late Winston Hayes and Rhoda Wooten Hayes. Lloyd was the beloved husband of Vanka Pausina Hayes for 33 years. He was the loving father of Sally H. Guysinger, L. Scott Hayes (Ashlynn), and Shawn Hayes (Susan). Lloyd was the grandfather of Margaux Guysinger, Meghan Guysinger, Ashton Hayes, Celeste Hayes, and Logan Hayes. Lloyd graduated from Bradley Consolidated High School in Cleveland, Tennessee, and Tennessee Wesleyan College in Athens, Tennessee in 1959 with a BS degree in Accounting. He joined the US Army Reserve in 1961 Served 6 months, was discharged and then was re-called to active duty and served one year. In 1973 he received a law degree from Loyola University in New Orleans, Louisiana and joined the firm of Adams & Reese. Later he formed his own firm Thomas, Hayes, Beham and Buckley, and practiced law for 30 years. He retired to Gulf Shores, Alabama and lived there for 16 years with his wife, one Bichon and two Yorkies. He and Vanka lived on the beach but found their interest was golf and so they moved to Peninsula Golf and Racquet Club in Gulf Shores and he and she played as often as they wanted. Lloyd had a love of music and joined the Gulf Shores United Methodist Church, Chancel Choir and sang with the choir for 16 years. He played the drums and formed a band, The Peninsula Boys. They played for weddings, political rallies, birthday parties, holiday parties and loved practicing and playing together. He also was in many musicals performed at the South Baldwin Community Theatre and loved every minute of it!! He joined the American Legion, Gulf Shores Post 44 and served as Treasurer. He and Vanka traveled the US playing golf with friends, and there was always another course they had to play! They recently returned to Louisiana and settled in Covington and he joined the St. Timothy choir and enjoyed singing with this choir. He became ill and was hospitalized at St. Tammany Hospital and I would like to thank the nurses, assistant nurses and the doctors and the entire staff for their compassion, kindness and care they showed to Lloyd and their red white and blue ceremony following his death. A Celebration of Life will be held privately by the Hayes Family. Please Share a Memory on the Tribute Wall at www.ejfieldingfh.com.

Lloyd Wallace Hayes passed away on Tuesday, April 13, 2021 in Covington, LA. He was born on September 2, 1937 in Vickery, OH to the late Winston Hayes and Rhoda Wooten Hayes. Lloyd was the beloved husband of Vanka Pausina Hayes for 33 years.... View Obituary & Service Information

The family of Lloyd Wallace Hayes created this Life Tributes page to make it easy to share your memories.

Send flowers to the Hayes family.