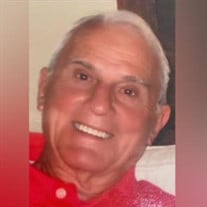 Lemuel William McCoy of Covington, Louisiana, born November 12, 1922 in Alto, Louisiana, passed away peacefully at home surrounded by his family on Thursday, March 4, 2021. Preceded in death by his loving wife of 61 years, Mary Jane Dillard McCoy; parents Martin Everett McCoy and Theodosia Shaw McCoy; brothers Martin Everett McCoy, Jr. and Theo Conner McCoy. Lem is survived by his son, Wimberly Dillard McCoy (Carla) of New Orleans and daughters, Ashley Conner McCoy of New Orleans, and Kelly Edwards McCoy Land of Mandeville. Loving grandfather of Conner McCoy, Campbell McCoy, Mary Claire McCoy, Turner Land and Mary Jane Land. Lem graduated from Rayville High School and attended Auburn University before enlisting in the United States Marine Corps in 1942 as the US entered World War II. He earned his wings as a Naval Aviator in the US Marine Corps and completed his tour serving in Japan until after the armistice in 1945. Upon his return he attended and graduated from Tulane University with a degree in Architecture. There he became a member of Tau Lambda Chapter of Delta Kappa Epsilon. The following year he attended the University of Rome in Italy where he received his master’s degree in architecture. While there, he had the privilege of a semi private audience with Pope Pius XII. Lem returned to New Orleans in the Fall of 1950. In 1952 he was called back to active duty in the Marine Corps. He was immediately trained in helicopters and ordered to Korea. In Korea he was detached from the Marine Air Wing and assigned to the 1st Marine Division in the Northwest section of South Korea. His mission was to evacuate the wounded to a hospital and resupply the outposts. He flew the UN Officials to the peace talks in Panmunjom, North Korea and he hand delivered the cease fire agreement to each Marine outpost along the front line. After serving in Korea he again returned to New Orleans and in 1959 Lem married the love of his life, Mary Jane Dillard. They remained in New Orleans where they raised their family. In 1994, Lem and Mary Jane retired and moved to Waveland, Mississippi. They relocated to Covington, Louisiana after Hurricane Katrina. Lem belonged to various social and professional organizations throughout his life. He was a founding member and later Chairman of the Board of St. George’s Episcopal School. He served as President of the New Orleans Chapter of the American Institute of Architects and was Elections Commissioner in Hancock County, Mississippi. Lem was an avid gardener and he found great joy spending time outdoors caring for his yard and plants. Lem will always be remembered for his warm hospitality by welcoming anyone and everyone into his home. He had an extraordinary way of touching the hearts of many. His remarkable memory provided for endless captivating stories. Most notable was his endless love for his Mary Jane. The family would like to thank all of Lem’s devoted caregivers especially Trisha Schultz and Felecia Walker. A joint memorial service to celebrate Lem and Mary Jane will be held at Covington Presbyterian Church, 222 South Jefferson Street, Covington, LA on Saturday, April 10, 2021. Visitation will be from 2:00 PM - 3:00 PM, with a service at 3:00 PM. In lieu of flowers, donations may be made to Covington Presbyterian Church Memorial Garden. To view and sign the family guestbook, please visit www.ejfieldingfh.com.

The family of Lemuel William McCoy created this Life Tributes page to make it easy to share your memories.

Send flowers to the McCoy family.