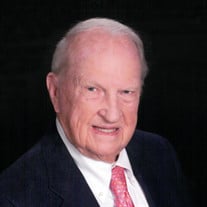 LEE RUSSELL SPENCE passed away peacefully at 3:28 A. M. on Wednesday, January 6, 2021 at age 101 at St Anthony’s Gardens in Covington, Louisiana. Survived by his beloved wife of fifty years, Sarah Domingue Spence, his children, Lynn S. Vandenesse, Thomas R. Spence (Serena) and Cary L. Spence (Elizabeth); also his stepchildren, Diane Wingo, J. Byron Wingo, Camille Wingo, Melanie W. Hughes ( Randy ), Maurice Wingo, II (Eleesa) and Stella W. Hillegass (Carl). He is also survived by nine grandchildren: Arthur Vandenesse (Raquel), Alexander Vandenesse, Max Vandenesse, Kevin Spence (Casey), Dallas Spence (Regan), Lydia Spence, Grace Spence, Anleigh S. Caldwell and Ashley S. Dickerson and six great-grandchildren. He is also survived by twelve step-grandchildren: Sam Allen (Jenn), Molly Gentry (Robby), Sarah Melody (Dave), Stewart Burns, Marissa Bottcher (Sean), Monica Smith (Charlie), Hampton Hughes (Hannah), Ross Wingo (Lauren), Eleanor May (Alex), Ronald Carl Hillegass III, Sarah Margaret Hillegass, and George Hillegass, and nine step great-grandchildren. Lee was born on October 11, 1919 to Dr. James Homer Spence and Lily Amiel Spence in Pass Christian, Mississippi. He is pre-deceased by his parents, his siblings, James Homer Spence, Jr, Cary Spence, Myrtle Spence McDermott, and Thelma Spence Pulkowski and Mr. Spence’s first wife Dean Via Spence. Lee was a graduate of Mississippi College School of Law and Rutgers Stonier Graduate School of Banking. He served in WWII in the Naval Intelligence. He first served on the USS Maumee, the oldest tanker in the Navy, then several other tankers, transporting oil from Aruba and Panama to the United States East Coast. Prior to the War, he was with the FBI, first in Washington, then New Orleans and Jackson, Mississippi. After the War, he graduated from Mississippi College School of Law earning a degree in 1949. He led the nation in production for three consecutive years as an attorney for the Estate Tax Division of IRS in Mississippi. He was a member of the Mississippi and Texas Bars. As a trust officer, he helped to build seven trust departments at banks in Louisiana, Mississippi and Texas. He received several honors during his lifetime, including a recommendation from U.S. Senators James Eastland and John Stennis to President Lyndon Johnson for a judgeship to the United States Tax Court. He was presented the Key to the City of Covington and honored by the 22nd Judicial Court of Louisiana with a proclamation of appreciation. Lee was active in various civic organizations in communities in Mississippi and Louisiana. He was trustee of several charitable foundations and was privileged to give donations to the City of Covington and City of Madisonville, St. Tammany Hospital and other charities, and worthy college students. Lee was president of the Estate Planning Council of Mississippi and the South Mississippi Estate Planning Council. Lee was president of the Florida Parishes Estate Planning Council. He was a co-founder of the Estate Planning Council in Tangipahoa and St. Tammany Parishes. He was chairman of the Trust Division of the Louisiana Bankers Association. He was a member and past president of the Rotary on the Mississippi Gulf Coast and in Louisiana. He served on the Southeastern Louisiana University Development Foundation for twenty years. He was an Episcopalian, growing up and attending Trinity Episcopal Church in Pass Christian. His grandfather provided the lumber for the first Trinity Church. He was active in boating, horseback riding, and tennis for most of his life. At age one hundred, he was still hitting tennis balls. Lee loved to travel with his family. Accolades follow Lee for his honesty, integrity, and generosity in all aspects of his life. Lee always sought to do “the right thing” for his family, his friends and his clients. All of his children and grandchildren fondly remember how often he told them he was proud of them. He will be missed. Relatives and friends are invited to attend the funeral services at E.J. Fielding Funeral Home, 2260 W 21st Ave, Covington, Louisiana 70433 on Friday, January 8, 2021 at 2:00 PM with visitation beginning at 12:30 PM. Proudly serving as honorary pallbearers: Judge Martin Coady, Judge Jack Greene, F. Pierre Livaudais, A. R. Blossman Jr. Interment with Military Honors will take place on Saturday, January 9, 2021 at 11:00 AM in Live Oak Cemetery, 125 Church Street, Pass Christian, Mississippi 39571. With COVID-19, restrictions social distancing and face mask are required to attend services. Memorial contributions to: MCLaw in memory of Lee Spence may be mailed to: Mississippi College School of Law Advancement Office 151 East Griffith Street, Jackson, MS 39201, or can be made at https://lawalumni.mc.edu/ The Spence family invites you to share thoughts, fond memories, and condolences online at E. J. Fielding Funeral Home Guest Book at www.ejfieldingfh.com.

The family of Lee Russell Spence created this Life Tributes page to make it easy to share your memories.

LEE RUSSELL SPENCE passed away peacefully at 3:28 A. M. on Wednesday,...

Send flowers to the Spence family.