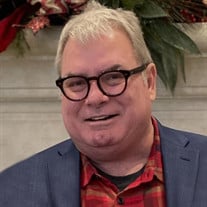 Keith Alan Long, age 63 of Covington, entered eternal rest peacefully Thursday afternoon, April 28, 2022 at his residence. He was born in Key West, Florida on April 12, 1959 to the late Robert A. and Mary Shirley Stamps Long. Keith is preceded in death by his brother Kevin Long. He is survived by his beloved wife Leslie Salter Long of 33 years. He will be sadly missed by his children Travis, Paige (Carlos), Joseph Dylan, and Morgan, as well as his brother Bryan Long (Heather) and Uncle Robert G. Stamps. His greatest joy was spending time with his grandchildren Willa Long, Grace, Carlie, and Miguel Deleon. Keith was cherished by his brothers and sisters-in-law and his cousins Elliot Stamps and Judy Macmillian (Randy). He leaves behind many nieces and nephews who loved their crazy uncle. Keith grew up in New Orleans and graduated from De La Salle High School in 1977 where he played football, ran track, and was a member of the marching band. He attended Louisiana State University, and after earning his bachelor’s degree, he started a 40-year career in the Oil and Gas Industry. He has done everything from working the rig floor to owning and operating his own oil fields. He loved technology and was proud to have created the Louisiana Desktop Well Reference while working for the Center for Energy Studies at LSU. He enjoyed coaching his kid’s sports teams and taking them on daddy trips. He looked forward to the Christmas season especially the Northshore Oilman’s Christmas Party, which he co-founded. He loved music, parties, spending time with family, and many afternoons he could be found at one of his favorite watering holes. Keith was generous, bold and one of a kind, and will be dearly missed by all who knew and loved him. In lieu of flowers kindly consider memorial contributions in memory of: Keith Alan Long, may be made to: The Abbey Bread Program at Saint Joseph Abbey. Donations may be either mailed to: Saint Joseph Abbey, Abbey Bread Program, 75376 River Road, St. Benedict, Louisiana 70457 or can be made online at: www.saintjosephabbey.com/donate-abbey-bread Relatives and friends are invited to attend the funeral mass at St. Jane de Chantal Catholic Church, 72040 Maple St. Abita Springs, Louisiana, on Tuesday, May 3, 2022 at 1:00 PM with visitation beginning at 11:00 AM until service time. Interment will follow the service in Saint Joseph Abbey Cemetery, 75376 River Road, St. Benedict, Louisiana 70457. E.J. Fielding Funeral Home locally owned and operated, (985) 892-9222 has been entrusted with funeral arrangements. The Long family invites you to share thoughts, fondest memories, and condolences online at E. J. Fielding Funeral Home Guest Book at www.ejfieldingfh.com.

The family of Keith Alan Long created this Life Tributes page to make it easy to share your memories.

Send flowers to the Long family.