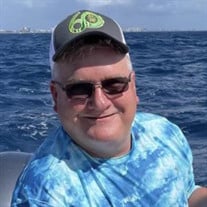 Keith Russell Bennett, 55, of Lacombe, Louisiana, passed away unexpectedly on June 15, 2021, at his residence. He is survived by his three children, son Nicholas R. Bennett and wife, Heather T. Bennett; daughter Cheyanne M. Bennett and fiancé, Robert Browning; son Cody S. Bennett; and five grandchildren, all of whom he loved and adored. He is also survived by his loving mother, Barbara J. Bennett, and two sisters, Stephanie B. Noel; Denise B. Lafoy and husband, Ron Lafoy; and six nephews. He was preceded in death by his father, George R. Bennett and brother-in-law, Ron Noel. After graduating from John I. Leonard High School, Keith served in the U.S. Navy as an Aviation Ordnanceman, Petty Officer 2nd Class, deployed to the Gulf War and was awarded the National Defense Service Medal among other commendations. Following his enlistment, Keith worked within the Department of Defense before transitioning to a dedicated career in law enforcement, where he served over 20 years protecting various departments and communities along the Gulf Coast. Keith’s wholehearted devotion to public service was evident in his bond with many brothers and sisters in law enforcement with whom he served. His legacy of service lives on in the hearts of his children, grandchildren, and those he has touched. In lieu of flowers, the family requests that donations be made to the National League of POW/MIA Families or the Wounded Warrior Project. Relatives and friends of the family are invited to attend a Celebration of Life on Saturday, July 24, 2021 at 5:00PM at the American Legion Hall, 3001 River Road, Jefferson, LA 70021. Please Share a Memory on the Tribute Wall at www.ejfieldingfh.com.

The family of Keith Russell Bennett created this Life Tributes page to make it easy to share your memories.

Send flowers to the Bennett family.