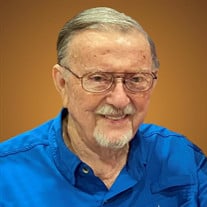 Karl Gottfried, Jr., age 87, entered into eternal rest on April 6, 2022. Karl was married for 65 years to his soulmate, Carol Elaine Fontan Gottfried. Born in New Orleans August 12, 1934, he was the proud son of the late Karl Gottfried, Sr. (1st generation German immigrant from Solingen, Germany) and the late Frances Renda Gottfried (1st generation Italian immigrant from Sicily, Italy). He enjoyed a very close bond with his sister, Elizabeth “Betty” Gottfried Blossman (James, Sr.) and his sons, Karl Gottfried III (Sherry Powell), Bernard Fontan Gottfried (Kimberly), and David Steven Gottfried (Susan). He adored his grandchildren Gretchen Marie Gottfried Reid (Mike), Gordon Paul Gottfried (Adriana), Steven Taylor Gottfried (Laura), Amanda Mabrey Gottfried Abarca (Augusto), Gabrielle Michelle Gottfried Shaw (Derek), and Benjamin Hugh Gottfried and was blessed with six great-grandchildren, Mia and Laken Shaw, Owen and Margot Gottfried, Cruz Abarca, and Taylor Gottfried. Karl graduated from Jesuit High School in New Orleans in 1952, Louisiana State University in Mechanical Engineering in 1957, and began a mechanical construction business which became Gottfried Corporation in 1963. Gottfried Corporation moved from Kenner to Covington when the family moved in 1977. Today the family business Karl began is 60 years old and in its 3rd generation. Karl was a horseman who rode with the Jerusalem Temple Shriners and the Kenner Drill Team. Later, he opened Maplewood Arena in Waldheim for quarter horse shows. Karl was a Master Mason for over 62 years and was active in both the Metairie Masonic Lodge and the Covington Lodge. Karl was an experienced boater and enjoyed sailing and yachting on the Tchefuncte River, Lake Pontchartrain and the intercoastal waterways of the Gulf of Mexico. Once he became a grandfather in 1986, he became “Skipper” to everyone. Karl and Carol were avid travelers and loved cruising. They have cruised around the world on countless cruises. He learned to paint while on these cruises and was very talented at that. He loved crooning Frank Sinatra songs and enjoying the occasional "rum and coke." Karl was a devout family man and loved cooking and entertaining big family gatherings at their home on the Tchefuncte River in Madisonville. Relatives and friends are invited to the Funeral Mass at E.J. Fielding Funeral Home, 2260 W. 21st Avenue, Covington, LA 70433 on Wednesday, April 13, 2022 at 11:00 AM with visitation from 9:00 AM until Mass time. Interment will follow the service at Pinecrest Memorial Gardens, Covington, LA. Please Share a Memory on the Tribute Wall at www.ejfieldingfh.com.

The family of Karl Gottfried Jr. created this Life Tributes page to make it easy to share your memories.

Send flowers to the Gottfried family.