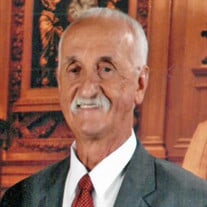 Joseph Roger Cassata of Madisonville, LA passed away on Saturday, January 30th, 2021 at the age of 82. He was born in Erie, PA on May 13, 1938 to Joseph and Glenda (Thornton) Cassata. Joseph (Joe) is survived by his beloved wife of 57 years, Carolyn (Orth) Cassata; devoted father to his children Jolyn Cassata Sundquist, Julie Cassata Coe (Chris) and Jodi Cassata Arieux (Jerry). Loving grandfather of Brandon Sundquist, Bryce Coe, Jordan and Jenna Arieux. Special friends Victoria and Riley Carrillo. Sister Joann Cassata Edwards and brother Max Cassata. Along with many nieces, nephews, cousins and friends. Preceded in death by his parents Joseph and Glenda Cassata of Alachua, FL, sisters Vivian Piazza and Sally Lou Cassata. Joe was born in Erie, PA. Graduated from Wesleyville High School in 1956. He joined the United States Marine Corp in 1958 and served as a Corporal. While serving at the Naval Air Station in Belle Chasse, LA he met the love of his life who stole his heart. They were married in July 1963 and moved to Chalmette, LA where they raised their family. He began his work career in the shipyard industry as a purchasing agent at Equitable Shipyard in New Orleans, LA, then at Elmwood Dry Dock & Repair in Belle Chasse, LA. He then moved into sales with Shipyard Supply and was working for Industrial Welding Supplies at the time of his death. Joe had a love and passion for all sports. He was a New Orleans Saints season ticket holder going back to when they played at the old Tulane Stadium. His coaching career began with teenage boys’ baseball, at the same time he was umpiring with the St. Bernard Umpires Association. From there he began coaching girls’ sports at Rebel Park. He was then chosen to coach the beginning of the 9 & 10 girls St. Bernard Biddy Basketball All Star Team, winning several state championships during his 17+ years tenure. Just a few years into his basketball coaching career, he was chosen to begin the 11 & 12 Dixie Softball Ponytail All Star Team, during which he won a state title. In his spare time, he enjoyed playing golf and loved to travel with his family and friends. He was a member of the AARP #5408. Known as Papaw, he loved attending all his grandchildren’s sporting activities. A private funeral was held on February 14th, 2021 at EJ Fielding Funeral Home in Covington, LA. Interment followed at Pinecrest Memorial Gardens in Covington, LA. In lieu of flowers, contributions in memory of Joe may be made to St. Jude’s Children Research Hospital (www.stjude.org/donate) and the Wounded Warrior Project (www.woundedwarriorproject.org).

Joseph Roger Cassata of Madisonville, LA passed away on Saturday, January 30th, 2021 at the age of 82. He was born in Erie, PA on May 13, 1938 to Joseph and Glenda (Thornton) Cassata. Joseph (Joe) is survived by his beloved wife of 57 years,... View Obituary & Service Information

The family of Joseph Roger Cassata created this Life Tributes page to make it easy to share your memories.

Joseph Roger Cassata of Madisonville, LA passed away on Saturday,...

Send flowers to the Cassata family.