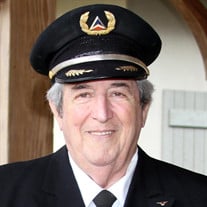 John David Owens, Sr., 82, of Covington, Louisiana, went to heaven on February 11, 2022, after suffering complications due to Covid-19. John is survived by his beloved wife of 35 years, Margaret Mayrer Owens; his sister, Vicki Aries (Roger); and his five beloved children, Jonna Greenwood (Mark), Terry Owens, John David Owens, Jr. (Robin), Carolyn Hall Parr (Jim), and Jenny Shows (Alex). He is also survived by his 11 grandchildren: John David Owens, III (Taylor), Daniel Hall, Elizabeth Greenwood, Ashley Suhm (Tyler), Miles Greenwood, Matthew Hall (Summer), Laura Hall, Sophia Owens, Maverick Shows, Patton Shows and Indy Shows. He has two great-granddaughters and another one on the way. He will be sorely missed by Oliver Newman, his loyal dog. John is preceded in death by his parents, Robert E. Owens Sr. and Madge Glasscock Owens, and his brother Robert E. Owens, Jr. John was born on June 4, 1939, in Saint Louis, Missouri. His family moved to New Orleans where John spent his childhood and graduated from John McDonogh High School in 1957. He then attended LSU and followed in his brother Bob’s footsteps becoming a fighter pilot in the LA Air National Guard. His training was in Lubbock, Texas and it was there he met and married Betty Henry and they had a daughter, Jonna. Sadly, Betty passed away in February 1962 during surgery. That summer John met Laura Sanders and in December 1962 they married. They had three children together: Terry, John David, Jr., and Carolyn. In 1966 they moved from New Orleans to Covington, Tchefuncta Estates, and remained married until 1983. In October of 1986, John married Margaret Mayrer, who also worked at Delta, and they had a daughter, Jenny. John and family resided at his Tchefuncta home until the time of his death. His commercial pilot career began in April of 1963 when John was hired by Delta Air Lines. Captain Owens was well known for his professionalism and regard for safety. John retired in 1996. He found great joy in his son and grandson of his namesake, becoming major airline pilots as well. This family tradition is far from over as his grandsons Maverick, Patton, and Indy await their turn in the not-too-distant future! John was an intelligent man, always delving into projects and learning new skills. His interests were many and varied. In the 1970s, he built the family’s stereo and TV. He built and flew radio-controlled planes. John baked cookies for the prison ministry, played musical instruments, gardened, had a pet store, tropical fish hatchery, shrimp boat, and owned a brine shrimp operation in Canada! He played tennis and golf and loved to go boating and fishing, meanwhile with the #400 Apple computer he created commercial software! He had a love of photography and his photographs have been published and won awards. He owned a larger motor home and traveled America, while also doing what he did best, which was to educate his and everyone else’s kids with a few surprise trips thrown in like Disney World! He and his wife Margaret, with a joint love of birds, built an amazing back yard that is home to migratory hummingbirds and has been visited by National Geographic. John loved life and the people in it. John made many friends along the way and cherished those relationships. He was the kind of person who drew people in. “Big John” was a loving husband and father, and a devoted master to his dog, Oliver. He will be missed greatly. Relatives and friends are invited to a public visitation at Tchefuncta Country Club, 2 Country Club Park, Covington, LA 70433 on Saturday, February 26, 2022 from 9:00 AM until 12:00 Noon. A private interment for immediate family only will follow the visitation. Relatives and friends are invited to a public celebration of life at St. Timothy’s Methodist Church, 335 Asbury Drive, Mandeville, LA 70471 on Saturday March 5, 2022 at 10:00 AM with visitation beginning at 9:00 AM until service time. Reception will follow immediately after. In lieu of flowers, the family requests donations be made to a charity of your choice. E. J. Fielding Funeral Home has been entrusted with the arrangements. The family invites you to share thoughts, fond memories, and condolences online at E. J. Fielding Funeral Home Guest Book at www.ejfieldingfh.com.

The family of John David Owens Sr. created this Life Tributes page to make it easy to share your memories.

Send flowers to the Owens family.