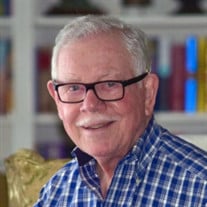 Dr. John “Jack” Petty McNulty died peacefully at his home in Covington, LA on August 31, 2020 at the age of 92. He was preceded in death by his wife of 59 years, Margaret Lillian DeMouy; his parents, John Perkins McNulty and Edith Petty McNulty; sister, Mary Fegley Tennyson; and sons, John Michael McNulty and Kevin Arthur McNulty. He is survived by his sister, Edith Ann McNulty Swaty; his children, Marcia Ann McNulty, Brian Robert McNulty (Jane), Susan McNulty Clausen (John), (Lillyn), and grandchildren, Robert, Richard, Jack, Harry, and Molly Jo. Dr. McNulty’s professional career began at the young age of 18 in his hometown of New Orleans, LA with a degree in Pharmacy from Loyola University. In 1947, after receiving his certification as a Registered Pharmacist, he began Tulane University School of Medicine where he was inducted in the Honor Medical Society and Alpha Omega Alpha before graduating in 1951. Dr. McNulty continued his career as a specialist in internal medicine at Touro Infirmary, where he also completed his residency, and teaching on the clinical faculty of Tulane University from 1957 to 1990. After 42 years practicing in New Orleans, Dr. McNulty moved his family to Covington, LA, and by a combination of personal tragedy and serendipity, he found a new career as a Palliative Medicine Specialist. From 2000 to 2016, he practiced and taught throughout Louisiana and Mississippi, employing community funds and grants to create a nonprofit educational foundation, The Palliative Care Institute of Southeast Louisiana. In collaboration with the Louisiana Mississippi Hospice and Palliative Care Organization, and by partnerships with many healthcare organizations, Dr. McNulty presented over 200 lectures and seminars. Through his hard work and dedication Dr. McNulty received Mary Bird Perkins Cancer Center, Holliday Award for care of cancer patients in 2006; the LA/MS Hospice and Palliative Care Organization, Heart of Hospice Award in 2006; the LA/MS Hospice and Palliative Care Organization, Lifetime Service Award in 2012; and was the Peoples Health Champion for Palliative Care (LA) in 2016. Dr. McNulty was recognized as the leading force in the development of palliative care in both Louisiana and Mississippi, and was honored at the Saints game in October, 2016. Funeral services are private with a celebration of life to be announced at a later date. In lieu of flowers, please make donations in memory of Dr. McNulty to www.lmhpco.org/donations. Interment in Covington Cemetery # 1 will be private. E.J. Fielding Funeral Home is in charge of arrangements. Please sign the E.J. Fielding Funeral Home online Guest Book at www.ejfieldingfh.com.

Dr. John &#8220;Jack&#8221; Petty McNulty died peacefully at his home in Covington, LA on August 31, 2020 at the age of 92. He was preceded in death by his wife of 59 years, Margaret Lillian DeMouy; his parents, John Perkins McNulty and Edith... View Obituary & Service Information

The family of Dr. John "Jack" Petty McNulty created this Life Tributes page to make it easy to share your memories.

Send flowers to the McNulty family.