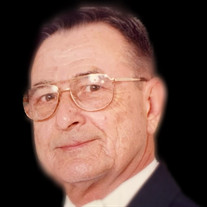 John Larue de la Houssaye, Sr. passed away peacefully in Covington, Louisiana on April 17, 2021 at the age of 89. He will be rejoined with his late beloved wife Theresa Toups de la Houssaye and his twin brother Philippe Larue (who passed away shortly after birth). Larue was born and raised in uptown New Orleans by the late Dr. & Mrs. Roy E. de la Houssaye and graduated from Jesuit High School in 1951. He is predeceased in death by his eldest brothers Roy, Jr. (“Sonny”) and Felix and is survived by his sister Margot Koch and his brother Jean Paul. Larue lived a full life first as a Jesuit brother and then later as a devoted husband and father. He enjoyed a long career in the medical, real estate and office supply fields and believed in making wise investments of his time, talent and treasure. In his retirement years, he worked as a driver for Enterprise Rent A Car. Larue never met a stranger and was a true southern gentleman who taught and led his family by his living example of faith, generosity and unconditional love. The following quote summarizes and epitomizes the way he raised his children: “he never told us how to live; he simply lived and allowed us to watch”. He will be missed dearly by his family and friends and is survived by his three children and their spouses Mimi Duplantis (Kevin), Jay (Jennifer) and Philippe (Michelle) and 8 wonderful grandchildren (Brandon, Madelyn, Caroline, Clayton, Christopher, Bryce, Reece and Rien). Relatives and friends are invited to celebrate Larue’s life with a Catholic Mass at St. Anselm Catholic Church, 306 St. Mary Street, Madisonville, Louisiana 70447, on May 14, 2021 at 11:30am, with visitation from 10:00am to 11:30am. A private interment will take place in Thibodaux on May 15, 2021. The family expresses deep appreciation for the staff at Avanti Senior Living in Covington for their love and care of Larue for the past few years. Arrangements by E.J. Fielding Funeral Home. In lieu of flowers, please kindly consider making a donation in Larue’s memory to the retired and infirmed Jesuits at St. Charles College in Grand Coteau (P.O. Box C, Grand Coteau, LA 70541 or online at www. jesuitspiritualitycenter.org). The de la Houssaye family invites you to share thoughts, fond memories, and condolences online at E. J. Fielding Funeral Home Guest Book at www.ejfieldingfh.com.

John Larue de la Houssaye, Sr. passed away peacefully in Covington, Louisiana on April 17, 2021 at the age of 89. He will be rejoined with his late beloved wife Theresa Toups de la Houssaye and his twin brother Philippe Larue (who passed away... View Obituary & Service Information

The family of John Larue de la Houssaye Sr. created this Life Tributes page to make it easy to share your memories.