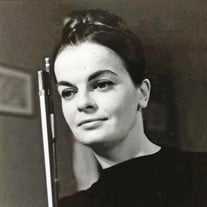 Joanne Zasucha Zaninelli, a child prodigy on the violin who performed with the Detroit Symphony at the age of ten, died peacefully on Saturday evening from the effects of Alzheimer’s. She was 85. Born in Detroit, Michigan, on Christmas Eve in 1936, her father delivered her in the family’s home on Burlingame Street. She is preceded in death by her parents, John and Rosalie (Chrobak) Zasucha, her sisters Bernardine and Lillian (John) Marek, and her brothers John and Fred (MaryAnn). She is survived by her brother, Ray, daughters Pia (Malcolm) Ehrhardt, Nina (Paul) Temple, Gianna (Jamie) Schlottman, and Gigi Turner, and seven grandchildren: Mia, Eliot, Andrew, Logan, Emme, Stephen and Alex, and three great-grandchildren: Miles, Lina and Gia. Ms. Zaninelli made her debut on a loaned Stradivarius violin at the Detroit Institute for Fine Arts when she was fourteen, wowing the audience with Giuseppe Tartini’s “The Devil’s Trill” and Camille Saint- Saen’s Introduction and Rondo Capriccioso, fearless in the staccato bowing, harmonics and double stops. She received much of her formal education at the Curtis Institute of Music in Philadelphia, where she was a student of Efrem Zimbalist and Toshiya Eto. Her career and her thirty-five-year marriage to the composer Luigi Zaninelli took her around the world, living in Rome, Calgary, and eventually settling in Hattiesburg, Mississippi. She performed as a soloist on national television on CBS, NBC and ABC, on programs that originated in New York, Chicago and Philadelphia. In Canada, she was a member of the Baroque Ensemble, and she frequently appeared as a soloist on CBC, Canadian public radio. For years she was the assistant concertmaster of the Gulf Coast symphony orchestra. In Hattiesburg, she opened her home to violin students, passing down the bowing techniques and work ethic she’d learned during her time at Curtis. Music defined her life and her relationships. She would meet new people and want to know what instrument they played, or whether they sang in their church choir. In her kitchen, the radio stayed tuned to the local classical music station; while in her living room, a music stand held the next piece of music she was preparing. Her daughters grew up with the sound of her violin filling the house. She didn’t play, she practiced, going over the same passage, needing to master it, but never perfecting it. The four of them will miss her as a musician, but especially as their mother. Her daughters were the joy and pride of her life, and their visits always brought a twinkle to her eye. At the end, she turned on the charm and wit, returning to a girlish youthfulness. Because of her attentive and kind hospice nurse, Sesalie Cooper, all members of the family had a chance to converse with her, video visits that left her smiling and everyone wishing for more time together. A private service will be officiated by their family priest, Father Tommy Conway, at E.J. Fielding Funeral Home, 2260 W. 21st Avenue, Covington, LA 70433 on Monday, January 24, 2022 at 11 a.m. The family invites you to share thoughts, fond memories, and condolences online at E. J. Fielding Funeral Home’s Guest Book at www.ejfieldingfh.com. In lieu of flowers, donations in her name may be made to the Curtis Institute of Music, 1726 Locust Street, Philadelphia, PA 19103.

Joanne Zasucha Zaninelli, a child prodigy on the violin who performed with the Detroit Symphony at the age of ten, died peacefully on Saturday evening from the effects of Alzheimer&#8217;s. She was 85. Born in Detroit, Michigan, on Christmas... View Obituary & Service Information

The family of Joanne Marion Zasucha Zaninelli created this Life Tributes page to make it easy to share your memories.

Joanne Zasucha Zaninelli, a child prodigy on the violin who performed...

Customized sympathy cards. Mailed for you.