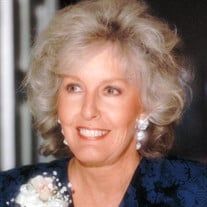 Joann K Sutton died on August 19, 2021. Joann Mae Kreft was born in Minneapolis, MN in January of 1933 to the late Alvin and Inga Kreft. She was known to friends and family as Joy. She attended Macalester College and transferred to the University of Oklahoma. There, she was introduced to the love of her life, Edward Arnold Sutton (Ed), who she married in August of 1957. She is the mother of the late Catherine Lynn Sutton and is survived by her daughter Julie Sutton Connelly. She is further survived by her four grandchildren: Christopher Michael Sutton, Shara Sutton Dean, Reed Connelly, and Seth Connelly. Her beloved great grandchildren include: Abryelle, Braelyn, Colburn, Carolyna, Troy, and Dylan. Joy, her husband, and their daughters moved around the country with Ed’s rising career at Parker Hannifin. They were given an opportunity to own a Parker Hannifin distributorship in New Orleans in 1978. The family moved to Mandeville and have been fixtures in the community ever since. Their business grew into a success with Joy at Ed’s right hand until his death in 2003. Since that time, Joy has continued to lead and grow Connector Specialists into a world-class fluid power distributorship. She’s also made time to travel the world, follow her beloved Sooners, involve herself in local politics, and was often found attending philanthropic events all over western St. Tammany Parish. She was passionate about Mardi Gras, participating in as many as three krewes at the same time. She is mourned by her fellow parishioners at All Saints Episcopal Church where she attended regularly. Joy loved taking pictures. She loved surrounding herself with a menagerie of rescued and adopted animals. She collected people too. There are so many in this community for whom Joy was like a second mother. She considered her employees, along with these adopted friends, part of her family. It’s one of the many reasons that she’ll be missed by so many. In lieu of flowers, donations in Joy’s name can be made to the St. Tammany Parish Humane Society. E. J. Fielding Funeral Home has been entrusted with the arrangements. The family invites you to share thoughts, fond memories, and condolences online at E. J. Fielding Funeral Home Guest Book at www.ejfieldingfh.com.

Joann K Sutton died on August 19, 2021. Joann Mae Kreft was born in Minneapolis, MN in January of 1933 to the late Alvin and Inga Kreft. She was known to friends and family as Joy. She attended Macalester College and transferred to the University... View Obituary & Service Information

The family of Joann Kreft Sutton created this Life Tributes page to make it easy to share your memories.

Send flowers to the Sutton family.