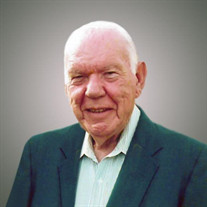 James “Jim” Magee, a resident of Beau Chene in Mandeville since 1975, passed away peacefully at Christwood Retirement Community on January 13, 2021 surrounded by family and supportive staff after a very brief illness with COVID-19 at the age of 92 1/2. Jim is preceded in death by his daughter, Patricia (1960), his wife, Kathleen (2001), and his brothers Edwin (2007) and Jack Magee (2018). Jim is survived by his son Jim and wife Kathy of Mandeville, and his daughter Donna and husband Edward Hooks, Jr. of Castle Rock, CO. He is survived by his grandchildren Shane Magee and wife Leslie of Mandeville, Edward Hooks III and wife Sharon of Hendersonville, TN and Christine Hooks of Alt, CO. He also leaves behind three adorable great children: Max and Laila Magee and Mia Hooks as well as honorary granddaughters Steffi Heclau of Leipzig, Germany and Camilla Danielson of Stockholm, Sweden whom he dutifully mentored as exchange students. Jim was born in 1928 into a family of legendary firefighters who fearlessly protected the citizens of intercity neighborhoods of Philadelphia to this very date. After faithfully supporting the family efforts at the firehouse at an early age, he enlisted in the Army at age 18 and was stationed in Germany where he facilitated Germany’s reconstruction efforts. He received an honorable discharge and in 1953 he started working in one of the warehouses of Airco Industrial Gas in the Philadelphia region as an apprentice. He met and married his wife, Kathleen in 1956 whom also worked at the company. He worked his way through the organization from an apprentice and eventually rose to become Executive Vice President and head of worldwide distribution and eventually moved the family to Montville, NJ in 1973. Jim was relocated and moved to Beau Chene in 1975 after purchasing one of the first homes built in the community on the 8th hole of the Oak golf course. He retired in 1983 and engaged in a second career working as COO of Hayes Dockside Inc. and successfully ran the many affiliated businesses owned by the Bertel and Miller families of New Orleans. He retired from Hayes Dockside in 2003 and greatly enjoyed working with the owners and the many employees whom he mentored in the office, warehouse and wharves of New Orleans. Jim was one of seven founding members of the Thunderbird Golf Club in Philadelphia. The club was founded to facilitate golf for peers that could not afford to play at private clubs. The organization has now been in existence for over 60 years and boasts over 700 members. Jim is also one of the initial founders of Beau Chene’s Pig Open and was a fixture in the Beau Chene’s Men’s Golf Association for many years. In his golfing days he was a near scratch golfer for most of his life and attained the ultimate hole in one on several occasions. He won a very prestigious Senior Open tournament in Mexico. Jim was considered one of the best bowlers in the Philadelphia area in his younger years. Jim enjoyed a full life and was well known for his daily golf cart rides with his beloved dog, Benji for 17 years. Jim was known for many years as the unofficial “Mayor of Beau Chene” and affectionately as Pop Magee. With age comes wisdom, and one of his primary sayings was, “You should treat everyone special, because they are special”. One of his guiding life principles was “always do the right thing”. Relatives and friends are invited to attend the funeral mass at Mary Queen of Peace Catholic Church, 1501 W. Causeway Approach, Mandeville, LA 70471 on Friday, January 22, 2021 at 11:00 AM with visitation beginning at 10:00 AM. The funeral mass will be available on zoom: https://www.youtube.com/mqpchurch Interment will follow at a later time in Resurrection Cemetery Bensalem Township, PA 19020. With COVID-19, restrictions social distancing and face mask are required to attend services. The family requests that in lieu of flowers a donation be made in his name to Fore! Kids Foundation (https://forkidsfoundation.org/), TakeCare/Tommy’s Place (https://takecarebr.org/) or a Humane Society of your choice. The Magee family invites you to share thoughts, fond memories, and condolences online at E. J. Fielding Funeral Home Guest Book at www.ejfieldingfh.com.

James &#8220;Jim&#8221; Magee, a resident of Beau Chene in Mandeville since 1975, passed away peacefully at Christwood Retirement Community on January 13, 2021 surrounded by family and supportive staff after a very brief illness with COVID-19... View Obituary & Service Information

The family of James John Magee created this Life Tributes page to make it easy to share your memories.

James “Jim” Magee, a resident of Beau Chene in Mandeville since...

Send flowers to the Magee family.