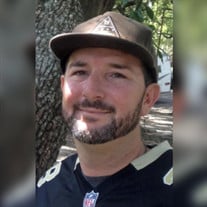 Jacques Charles Favret died unexpectedly on February 26, 2021 at his home in downtown Covington, Louisiana at age 41. Jacques was born in New Orleans on May 25, 1979 to Catherine (George) and Uncas B. Favret, Jr. He went to schools in Covington, graduating from Covington High School in 1998. Jacques had a widely varied career that came full circle in time. Work took him from a stint working vineyards in Adelaide, Australia to fine restaurants in Winter Park, Florida to grounds keeping at Metairie Country Club and eventually back to Covington working as a glass laminator. Having donned his first wetsuit at age three, Jacques lived an exhilarating life pursuing all the things he loved most – fishing, surfing, skateboarding, wakeboarding, wake skating, Jazz Festing, camping, the New Orleans Saints, and the Alabama Crimson Tide. His charismatic personality, zest for life and ‘coolest guy in the room’ vibe made it fun to be around him. While he and his River Rats were known up and down the Tchefuncte for their wakeboarding prowess, Jacques’ renditions of tantrums, whirlybirds, and raleys catapulted him onto the covers of magazines and into pro tours. He was a consummate athlete, outdoorsman, and all-around thrill-seeker. The greatest thrill of his life, however, was his daughter Delilah. Jacques delighted in teaching her all the sports and skills that he knew so well. They loved visiting the lakefront, surfing Lake Pontchartrain, and bike riding. Jacques is survived by Delilah’s mother, Gina Liberto Favret and her children Philp Scholes and Adrianna Thrasher. “Jaco” was passionate about spending time with family, especially at the Leeville fishing camp. As the fourth of five children, Jacques is survived by siblings Ben Favret (Yvette Celentano Favret), Lorrie Favret Anderson (Don Grose), Suzanne Favret Woodward (Brent Woodward), and Andre Favret (Lacie Hurst Favret). He is also survived by a bevy of nieces and nephews, ages 2 to 22. Jaco was the cool uncle to Michael Anderson, Cas Favret, Ethan Anderson, Charlie Woodward, Matthew Anderson, Reed Favret, Catherine Woodward, Adrienne Favret, Garrett Favret, George Favret, and Samuel Favret, and they all worshipped him. The family will gather on March 3 to remember Jacques and to celebrate their love for him and for each other. In lieu of flowers, the family asks that dear ones join them in showing their support and gratitude of the mission and good work of Bridge House New Orleans. For more information: Lorrie Favret Anderson, 407-234-8209, [email protected] Share a memory on the tribute wall at www.ejfieldingfh.com

Jacques Charles Favret died unexpectedly on February 26, 2021 at his home in downtown Covington, Louisiana at age 41. Jacques was born in New Orleans on May 25, 1979 to Catherine (George) and Uncas B. Favret, Jr. He went to schools in Covington,... View Obituary & Service Information

The family of Jacques Charles Favret created this Life Tributes page to make it easy to share your memories.

Send flowers to the Favret family.